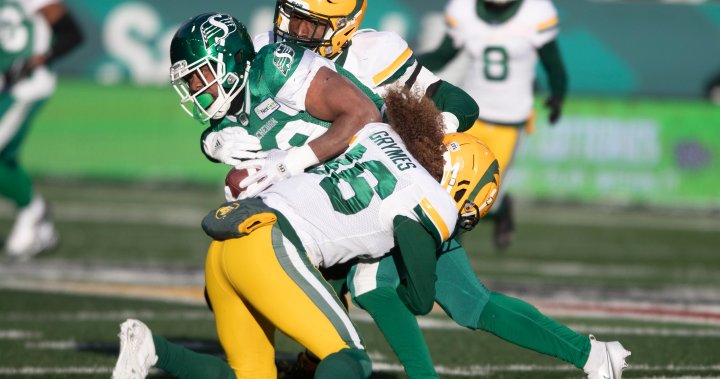 The Saskatchewan Roughriders clinched second place in the CFL’s West Division with a 29-24 victory over the Edmonton Elks on Saturday.

The Riders will now host the Calgary Stampeders in the West Division semifinal on Nov. 28.

The Riders trailed 21-20 heading into the fourth quarter but regained the lead when fullback Alexandre Dupuis scored on a four-yard pass from Cody Fajardo with 6:28 remaining in the game. It was the first career touchdown for the 31-year-old Dupuis, who is in his sixth CFL season.

Highlights from the Elks 29-24 loss to the Riders

The Elks narrowed the deficit to 26-24 with a 38-yard field goal by Sean Whyte with 3:12 remaining but the Riders sealed the victory on Brett Lauther’s 27-yard field goal with 33 seconds left in the game.

The Elks opened the scoring midway through the first quarter when Taylor Cornelius connected with Jalen Tolliver on a 24-yard pass. The touchdown came after Saskatchewan’s Jamal Morrow fumbled a punt, which the Elks recovered on the Riders 22-yard-line.

Morrow immediately made up for his gaffe by returning the ensuing kickoff 82 yards. It was the longest kick return of the season for the Riders, and after an Edmonton penalty for a horse-collar tackle on Morrow, Saskatchewan started the possession on the Elks eight-yard-line.

After a short run by William Powell, Fajardo hit Kian Schaffer-Baker on a six-yard touchdown pass to tie the game at 7-7.

Fajardo followed up with a 14-yard scoring pass to Duke Williams early in the second quarter to increase the Saskatchewan lead to 14-7. A conceded safety by the Elks and a single by punter Kaare Vedvik increased their lead to 17-7.

The Elks narrowed the gap to 17-14 late in the first half with Cornelius and Tanner Green combining on a five-yard touchdown pass. The scoring drive was eight plays and one Saskatchewan penalty with running back Walter Fletcher handling the ball on the first seven plays. He gained 41 yards on five carries and 15 yards on two receptions before Green scored the major.

In the third quarter, Lauther kicked a 22-yard field goal to give the Riders a 20-14 lead.

Edmonton regained the lead late in the third quarter when Tolliver caught a four-yard scoring pass from Cornelius. The touchdown was set up two plays earlier when Tolliver hauled in a 30-yard pass on a play where the Riders appeared to have Cornelius trapped. The quarterback slipped away from the pressure and found Tolliver wide open in the flat.

Fajardo, who was 12 for 16 passing for 139 yards and two touchdowns in the first half, finished 23 of 32 for 245 yards with three touchdowns and one interception.

Williams had an impressive half, catching six passes for 115 yards and one touchdown. His longest reception of the half was a 48-yarder. He finished with eight receptions for 146 yards.

Cornelius was 20 for 30 passing for 224 yards with three touchdowns and one interception after going 12 for 18 for 88 yards and two touchdowns in the first half.

Pete Robertson and Deon Lacey had sacks for the Riders in the first half while AC Leonard added his 10th sack of the season in the fourth quarter. Jay Dearborn came up with an interception on Edmonton’s final possession of the game.

Nafees Lyon had an interception for the Elks and Jake Ceresna had one sack.