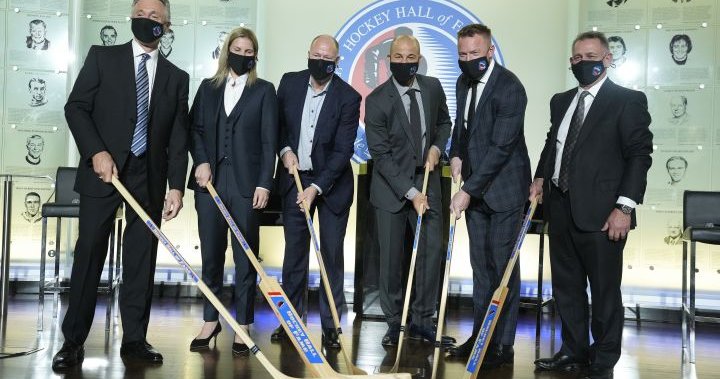 So another 365 days for the Hockey Hall of Fame’s pandemic-delayed class of 2020 was probably no big deal, right?

“Not at all,” Lowe said with a laugh Friday.

“We got to relish the moment even longer.”

Lowe and Wilson are joined in the 2020 player category by Jarome Iginla and Marian Hossa — elected in their first years of eligibility — and Canadian women’s national team goalie Kim St-Pierre, while Edmonton Oilers general manager Ken Holland is going in as a builder.

“I never even viewed the Hall of Fame as a reality,” said Wilson, GM of the San Jose Sharks. “It’s just a privilege that it happened.”

“We got to be a unique class,” Lowe added.

The inductees were originally announced following the 18-member selection committee’s vote back on June 24, 2020, but the ceremony was delayed a year because of COVID-19.

The hall, which will officially welcome its newest members Monday, then made the decision to not have a class of 2021 so the current group wouldn’t have to share centre stage.

“The health of people was the priority,” St-Pierre said. “We knew that this day would happen.”

Iginla, 44, won the Art Ross Trophy as the NHL’s leading scorer in 2001-02, and grabbed the Maurice (Rocket) Richard Trophy with the most goals that season and then again in 2003-04.

“Whenever it was going to happen, I was thrilled,” Iginla said of the pandemic throwing a wrench in plans. “It’s such an honour.”

Selected 11th overall at the 1995 NHL draft by Dallas before being dealt to the Flames as part of the Joe Nieuwendyk trade, Iginla willed Calgary to Game 7 of the 2004 Stanley Cup final, but never again got close to hockey’s ultimate prize.

While he didn’t enjoy much NHL team success, Iginla won two Olympic gold medals and played a key role in one of the most iconic moments in Canadian hockey history, assisting on Sidney Crosby’s 2010 golden goal.

“It’s really cool, the whole process,” Iginla said. “It does make you look back.

“There are so many things to be thankful for.”

Watch below: Some Global News videos about Jarome Iginla.

A three-time Cup champion, Hossa finished his career with 525 goals and 1,134 points in 1,309 regular-season games with Ottawa, Atlanta, Pittsburgh, Detroit and Chicago.

Hossa lost the 2008 final with Pittsburgh and again in 2009 with Detroit before finally getting his hands on the Cup in 2010.

He credits time spent with former Red Wings star Pavel Datsyuk — including games of keepaway after practice — for really sparking the two-way style that got him to another level.

“I started putting more pride to play up-and-down hockey,” said Hossa, 42, who declined to address the Blackhawks’ sexual assault scandal that’s rocked the hockey world after releasing a statement earlier this month. “I loved to still score goals, but I’d love to steal the pucks even more.”

Drafted by Edmonton 21st overall in 1979, Lowe won five Cups in his 13 seasons in the Alberta capital. The native of Lachute, Que., then grabbed another title with the New York Rangers in 1994.

“Whenever the Hall of Fame voting would come up and you wouldn’t see your name you go, ‘I guess that if you’re not on the list, you’re probably not getting in,”’ said the 62-year-old. “I was OK with that.”

“When I started playing hockey, women’s hockey was not an Olympic sport,” said the 42-year-old from Chateauguay, Que. “To be able to witness how much to sport as grown (is great).

Following his playing career, Holland served as a scout with Detroit before moving up to assistant GM. Named the club’s GM in 1997, the Vernon, B.C., native spent 22 seasons in the post, winning three Cups.

1:58
NHL builder Ken Holland to get Vernon’s Freedom of the City award

NHL builder Ken Holland to get Vernon’s Freedom of the City award – Oct 26, 2021

The seventh selection in 1977, Wilson played 14 seasons with Chicago, claiming the Norris Trophy as the league’s top defenceman in 1982. Traded to San Jose in 1991, the Ottawa native played his final two seasons on the West Coast before later moving to the team’s front office, where he’s served as GM since 2003.

“The call from (Hall of Fame chairman Lanny McDonald) was a surprise,” Wilson said. “It was very much appreciated… but unexpected.”

Hossa believe Alfredsson will end up in Hall of Fame

Hossa played his first seven NHL seasons in the nation’s capital alongside Daniel Alfredsson — a player who continues to wait his turn to get a nod from the hall along with the likes of Alexander Mogilny, Curtis Joseph, Rod Brind’Amour and Jennifer Botterill.

The decision to not have a class of 2021 could delay that even further with the likes of Henrik and Daniel Sedin now eligible, but Hossa believes his former captain will eventually get tapped on the shoulder.

“Just such a positive guy — a guy you love to be around,” Hossa said of Alfredsson. “I had lots of great memories with Alfie. Sooner or later, he’s going to be here.

The hall’s class of 2020 might notice something out of the ordinary not far from where the ceremony is set to take place Monday.

The Professional Women’s Hockey Players Association and Budweiser have erected a temporary monument on Front Street in downtown Toronto titled “This Game is For Us All.”

Four-time Olympic gold medallist and PWHPA operations consultant Jayna Hefford said the work featuring a female hockey player cheering on her team from behind a 10-foot-long board is meant mean to spark conversation.

“Hockey needs to become more inclusive, especially if we want to see it continue to evolve and grow,” she said in a phone interview. “Women feeling a part of the game is just one aspect of that.”

A member of the Hall’s 2018 class, Hefford said she was at the monument earlier this week when a young family stopped to take a look.

“The little girl just stood there and stared at it,” Hefford said. “That’s what it was meant to do. All of a sudden, this young girl sees a female hockey player.

“It’s a big week for women’s hockey with Kim St-Pierre being inducted into the Hall of Fame. We hope it adds to that spotlight.”