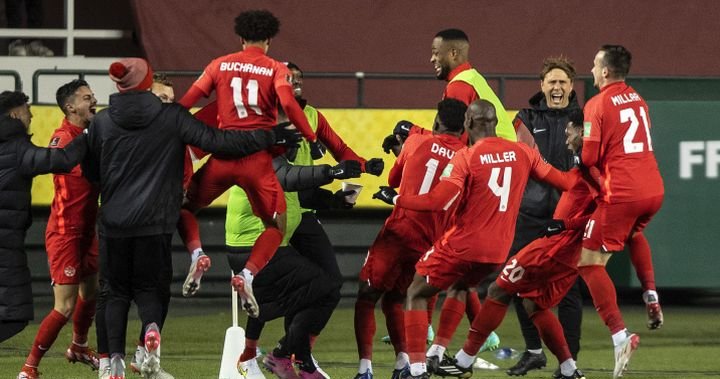 A second-half goal from Jonathan David has put Canada one step closer to the World Cup.

David’s 57th-minute goal was all Canada needed to beat Costa Rica 1-0 on Friday in a World Cup qualifier in front of 48,806 fans at Edmonton’s Commonwealth Stadium.

The goal came after Costa Rican goalkeeper Leonel Moreira fumbled a cross into the penalty area, leaving David to slot the ball home.

With the win, Canada remains in third place in CONCACAF’s Octagon. Canada has 13 points from seven matches (3-0-4) while Costa Rica fell to 1-3-3.

The top three teams in the standings will earn berths for next year’s World Cup in Qatar. The fourth-place team gets a last-chance playoff with another wild-card team from another region.

Moreira started for Costa Rica because of an injury to the national team’s regular starting keeper, Keylor Navas of Paris St-Germain.

The goal came minutes after a leaping bicycle kick by Canadian winger Tajon Buchanan froze Moreira in his tracks, but the ball hit the bar – the second time the Canadians found the woodwork in the game.

The first close call came in the 15th minute. A corner kick from hometown hero Alphonso Davies went into a scrum of Costa Rican defenders and ricocheted off the crossbar.

The game marked the first time Davies played a competitive game in Edmonton since his early teens. But throughout the first half, the Bayern Munich star was regularly crowded out by two or three defenders each time he got close to the ball.

He did get a look at goal in the 15th minute, but his shot was blocked thanks to a sliding effort from defender Oscar Duarte.

Davies had another chance in the 66th minute, but he blasted his shot over the bar.

READ MORE: Canada aims to score first but also not worried about getting behind early in World Cup qualifiers

Seconds later, Salas was in the mix again. The majority of fans in attendance bayed for American referee Ismail Elfath to award a penalty after Salas brought down David in the Costa Rican box, but Elfath waved off the appeals.

Twice in the first half, the teams came together in scrums after fouls, adding a bit of heat to the encounter in the chilly 1 C weather.

The first came after Canadian defender Richie Laryea earned a yellow card for kicking out at Costa Rican attacker Jewison Bennette. Then in the 23rd, Bennette returned the favour, getting a yellow after another altercation with Laryea.

Canadian defender Steven Vitoria also saw yellow in the first half. Ricardo Blanco got a yellow in the 70th minute for a foul on Buchanan.

Ike Ugbo made his debut in a Canada jersey, coming in as an 82nd-minute substitute. Ugbo, a former England youth international, declared his intent to play for Canada last week.