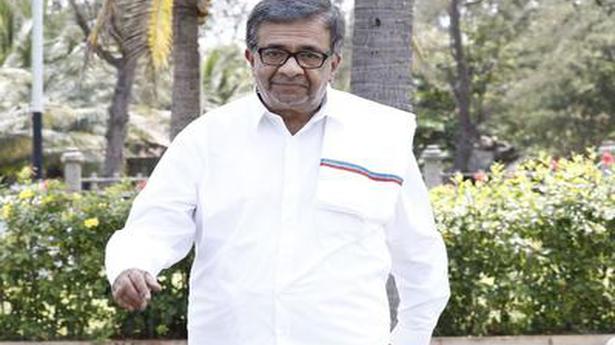 To reach the common man, they wanted to create plays written in colloquial Tamil, with an occasional English word thrown in.” As UAA gets set to enter its 70th year, Mahendra, at UAA’s helm since 1975, is celebrating his own 60th year in theatre.

Several renowned actors started life in UAA. Cho. Ramaswamy, Mouli and Visu began at UAA, subsequently branching off on their own. Former Chief Minister J. Jayalalithaa acted in two UAA plays, Under Secretary (1964), pairing with Cho, and Malathi the Menace (1966). “Her mother Sandhya wanted her to get trained in theatre before launching her as an actor in movies,” says Mahendra, now 72. Some of UAA’s plays subsequently became hit movies featuring stars such as Sivaji Ganesan.

YGM with members of UAA

From stage to films

Pen Paduththum Paadu (1954) with Sandhya became the 1963 movie Arivaali. ‘Vietnam Veedu’ Sundaram’s Kannan Vandaan (1968) became the 1973 movie Gauravam. 1961’s Petraldhan Pillaiah (which became the 1963 movie Paar Magale Paar) signalled Mahendra’s entry as a professional theatre actor and he has been part of every UAA play since. He mentions the excellent writers UAA has had through its long innings, including Padmanabhan, ‘Vietnam Veedu’ Sundaram, Mouli, ‘Vennira Adai’ Murthy, P.V.Y. Raman, Venkat and ‘Chitralaya’ Sriram among others.

Actor A.R. Srinivasan (ARS) joined YGP in 1962 when Padmanabhan left. “ARS brought in a lot of young talent including Mouli and Visu.”

ARS’ other discovery, Suppini (T.M. Subramanian), has been a fixture at UAA since joining 48 years ago. Mahendra adds, “ Sivaji Ganesan Sir, who watched all our plays until his death, would always ask if Suppini was in each one.”

UAA’s Vaalibam Thirumbinal was the first Tamil play to be telecast on Doordarshan Madras on its inaugural day (August 15, 1975). Mahendra’s first movie was Navagraham, by K. Balachander in 1970. He has since acted in more than 250 films, including 33 with Sivaji Ganesan, and in more than 15 television serials, producing and directing some as well.

Premiering at Narada Gana Sabha tomorrow (and on Sunday, at 6.30 p.m., followed by shows in many other venues; tickets at Bookmyshow.com) UAA’s latest play, Charukesi, is inspired by the late Crazy Mohan. Mahendra explains that Mohan had envisioned a powerful script laced with humour, keeping him in mind, but passed away before writing it. “Balaji (Mohan’s brother), Venkat and I brainstormed and Venkat completed the script in barely 10 days. It is about a star Carnatic singer who develops Alzheimer’s.”

The title music is by Rajhesh Vaidhya and the background score by ‘Hindu’ Bala.

According to Mahendra, UAA is the only Tamil theatre group that has travelled widely across the world. The countries visited include the U.S., Sri Lanka, Malaysia, Singapore, Hong Kong, Japan, Australia, New Zealand, the Gulf countries, U.K., France, Germany, Denmark, Norway, Sweden, Kenya, Canada and Thailand. UAA also has a Chicago branch now that casts for their North American shows. “My goal is to stage Tamil plays wherever there is a Tamil diaspora,” says the actor.

The Chennai-based author writes on art and culture.

Mohiniyattam’s moment of reckoning – The Hindu