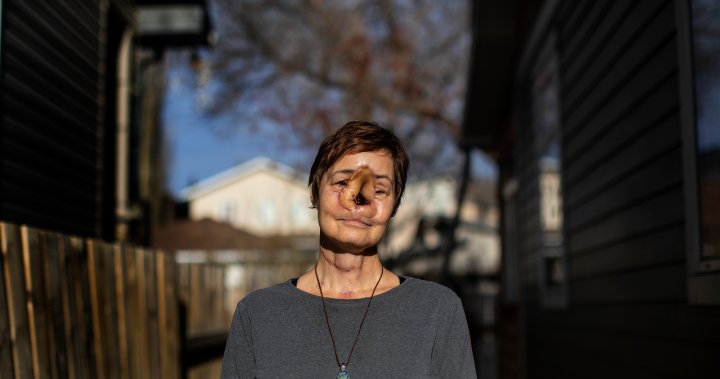 A woman whose surgery in Alberta for cancer in her face was delayed because hospitals were overburdened with COVID-19 says the consequences for her have been drastic.

Sharon Durham of Wynyard, Sask., says she would not have lost her entire nose if the surgery had been done sooner. She will have to wear a prosthetic one for the rest of her life.

“I could have used part of my old nose and just had some plastic surgery done,” Durham, 54, told The Canadian Press.

“I could have probably moved on.”

In late September, Alberta cancelled non-essential surgeries because of the crippling fourth wave of COVID-19. Durham was one of 15,000 people whose operation was delayed.

“Postponements during wave four extended to all out-of-province surgeries where there was an anticipated need for post-operative ICU care. This helped ensure (Alberta) had adequate ICU capacity, even when demand was extremely high,” said Kerry Williamson, a spokesperson for Alberta Health Services.

Williamson said there were already limits on who was to receive health care during the first wave in March 2020.

“These limitations were for non-urgent cases and non-urgent ambulatory care for out-of-province patients.”

Williamson said the health provider is extremely sorry for the anxiety and concern the delays have caused patients.

2:07
The trickle-down effect: Alberta ICU physician worries about ‘deserving patients’ not getting care

In April 2020, Durham had a 23-hour surgery in Alberta to remove cancer in her nose and under her left eye. A surgeon reconstructed the former dental hygienist’s nose with the help of a screw. She had two more surgeries in the province after that.

She said she began trying to book a biopsy with her surgeon last May because her nose looked inflamed. Her doctor in Saskatchewan told her she needed to get the screw removed.

The doctor regularly cleaned her nose but said only the surgeon who had operated on her could help.

Durham said she tried twice to book a biopsy, but was told Alberta was not taking out-of-province patients because of COVID-19.

“I was scared. It’s an aggressive cancer. It just kind of eats through everything in its path,” said Durham, who added her surgeon tried his best to make her case.

In July, when she finally got an appointment in Edmonton, the doctor took one look at her and told her he believed the cancer had returned. Her surgery was booked for September and then rescheduled to early October.

This week, she had a followup appointment in Edmonton. Doctors told her they were pleased with the results.

“I am very pleased, too, but I’m still scared,” she said.

The cancer in her face has returned three times and Durham worries delays between her appointments will cause it to reoccur.

“Now I’m waiting (for) a prosthetic nose that’s just temporary for now. We’ll have to go in and do another surgery where (the surgeon) puts implants on my forehead, which the final prosthetic nose will attach to.”

2:10
‘You really feel like life is on hold’: Young Calgary boy with brain surgery postponed finally gets operation

‘You really feel like life is on hold’: Young Calgary boy with brain surgery postponed finally gets operation

Again, due to the pandemic, that’s not expected to happen until February, she said.

“I just want this cancer to be gone. Whether I’m back to work as a dental hygienist or pumping gas. I don’t care. I just want to survive and move on.”

Durham said she’s frustrated by people who refuse to be vaccinated against COVID-19.

She wants her story to show how that decision hurts others with health problems.

“I want them to go get their vaccine. That way we don’t plug up our hospitals and keep delaying these surgeries.”