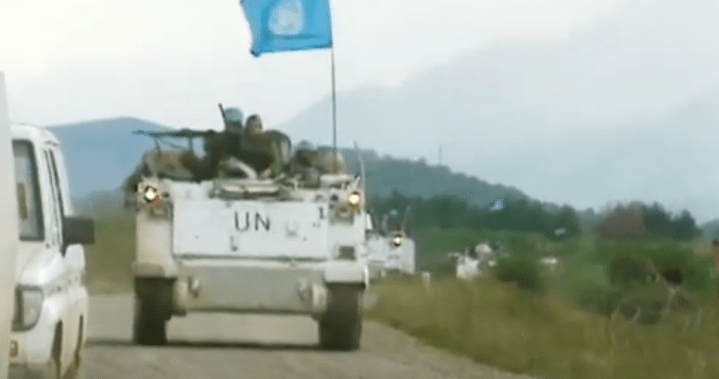 A British Columbia veteran is looking back at what, for many years, went as one of Canada’s forgotten battles.

Tony Spiess is a former Canadian peacekeeper, who served with the United Nations Protection Force in the fractured former Yugoslavia.

In 1993, he was at the end of his tour as a machine gunner when his battalion was deployed to enforce a ceasefire line between Croatian and Serbian forces in an area that came to be known as the “Medak Pocket.”

On Sept. 9, that fragile peace dissolved when the Croats launched an offensive, capturing the Serbian-populated area around the town of Medak; a new ceasefire was established, which called on the Croatians to withdraw.

A week later, UNPROFOR deployed hundreds of troops from the 2nd Battalion Princes Patricia’s Light Canadian Infantry to enforce the deal, but things broke down when they tried to enter the pocket.

“The Croatians hit us around suppertime … and they hit us really hard,” he told Global News.

“All we had was what we carried into battle with us … And I guess, well you know — business is business.”

The ensuing battle produced the most intense fighting Canadian soldiers faced between the Korean and Afghan wars.

The Canadians fortified their position and for 15 hours withstood waves of machinegun and artillery fire.

“They were effectively trying to kill us — 100 per cent,” Speiss said.

Four Canadians were wounded in the battle.

The Croatians were eventually forced to withdraw amid political and media pressure. Canadian troops then entered the Medak Pocket, where they found evidence of horrific violence against Serbian villagers and what appeared to be ethnic cleansing by Croatian soldiers.

Evidence collected by the Canadians was later used in international war crimes investigations.

“It was extremely horrific to see, but … we saved a lot of civilian lives, and that’s something I’m very proud of,” Spiess said.

While the battle constituted the most serious action Canadian troops had seen in decades, it was years before many Canadians learned the story.

The Canadian government didn’t recognize the battle until 2002, when Gov. Gen. Adrienne Clarkson awarded the battalion the Commander-in-Chief Unit Commendation.

“That was the hardest part. Returning home, it was quite impressive how the Liberal government made a whole war disappear just like that,” he said.

“It damaged a lot of soldiers morale … It’s not that we wanted a parade or anything when we came home — just a ‘job well done.’”

The battle is now formally remembered, acknowledged on the Veterans Affairs website as “a forgotten chapter in our country’s military history.”