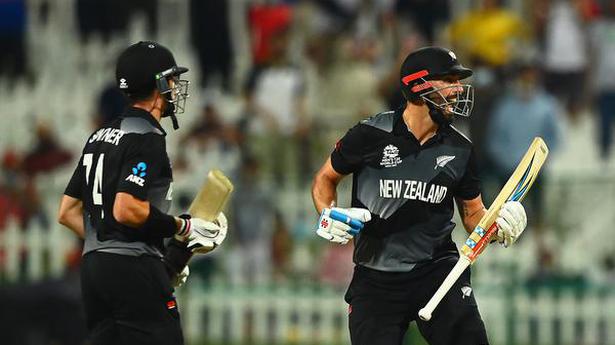 With the side needing 57 off the last four overs, Neesham turned things around with big blows before Mitchell delivered the knock-out punch

This helped the Black Caps avenge their defeats against the Three Lions in the 50-over World Cup final in 2019 and the 2016 T20 World Cup semifinal. It will be New Zealand’s maiden appearance in the World T20 final after losing in the last-four stage twice (2007 & ’16).

Chasing a target of 167, the Kiwis slipped to 13 for two. Mitchell, despite struggling to find his rhythm against Mark Wood’s pace and Adil Rashid’s leg-spin, and Conway steadied the ship with an 82-run partnership for the third wicket. Conway fell in the 14th over, charging at leggie Liam Livingstone and getting stumped by Jos Buttler.

With 57 required off the last four overs, Neesham went after Chris Jordan, hitting two sixes and a six as 23 came off the 17th over. In the next, the left-hander smashed Rashid for a six before falling in the same over. By the time he left, Neesham had brought down the target to 20 off two overs.

Chris Woakes, England’s best bowler till then, was carted around the park by Mitchell. The opener hit sixes off successive balls before sealing the contest with a boundary off the final ball of the 19th over.

Before Mitchell and Neesham’s heroics, New Zealand’s bowling unit had put in yet another solid performance to restrict England to 166 for four after electing to field.

Moeen was promoted in the batting order to No. 4, after Buttler’s dismissal in the ninth over, to counter the spin duo of Ish Sodhi and Mitchell Santner. With the leggie and the left-armer turning the ball into the left-hander, Williamson was forced to alter his strategy.

Santner bowled a solitary over, part-time offie Glenn Phillips chipped in with one and Neesham delivered two overs to complete the fifth bowler’s quota. Morgan’s men, boasting of an array of big-hitters, could never really get going.

For sub-continental spin masters, all the world’s a stage | Cricket News