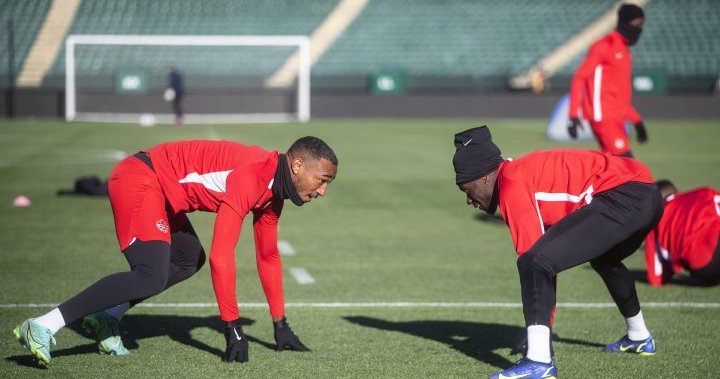 Depending on which number-crunching study or oddsmaker you follow, the team scoring first has about a 67 per cent probability of winning a soccer game.

So far the Canadian men’s national team has defied the odds.

The Canadians have gone down 1-0 in four of the six matches they have played in CONCACAF’s Octagonal round of World Cup qualifying. Throw out a 0-0 draw with Jamaica, and Canada has scored first just once in this round.

Yet, the Canadians are undefeated, with two wins and four draws. They’ve come back from one down to draw both the United States and Mexico. They’ve gone down early at home to both Honduras and Panama, and got a draw and a win.

Going into two home games in Edmonton — against Costa Rica on Friday and Mexico on Tuesday — the Canadians are confident they can come back again, even if their form of giving up early goals continue.

“The beauty for us is that you go down 1-0 and we know that’s going to be a challenge, but we’ve responded.”

The Canadians have scored 10 goals in six Octagonal matches, and sit third in the table. The top three teams qualify for the World Cup, while the fourth-place team gets a last-chance playoff with another wild card from another region.

The 10 goals tie the Canadians with Mexico as the top offensive team out of the eight remaining CONCACAF sides. So Herdman wants his high-octane team not to worry about being tight to start games. If the Canadians give up a goal, so be it.

“This is a new Canada we’re trying to create here,” he said. “We haven’t got to be worried about conceding goals. We’ve got to be confident enough that we can score. We can score in any situation in any stadium — and letting them play with that sort of freedom, and not the pressure of being the gritty Canadian team that holds a tight game.”

Star winger Alphonso Davies was a little more reserved in his assessment.

“We know that defensively we haven’t been starting games too well,” said the Bayern Munich star. “But it goes to show you the fight we have on this team. But we know in these two games, we can’t take anything for granted. We can’t give them easy goals too early.”

“Obviously, it’s never ideal to go down a goal and be losing from the get-go,” added attacker Liam Millar, who plays his club soccer for Swiss club FC Basel. “But I think it show our mentality and our willingness to really win games, and how much we believe in ourselves. Of course we can start games better, and get that first goal.”

Canada Soccer officials said Wednesday that ticket sales neared the 45,000 mark for Friday’s match, and many will be pumped to see Davies play in front of a hometown crowd since he was a teenager playing rep games. They are hoping to see a repeat of Davies’s spectacular solo-effort goal that propelled Canada to a 4-1 win over Panama Oct. 14 in Toronto.

“There will be a little bit of butterflies but, once the whistle blows, it’s just me and the team focusing on our task ahead of us, which is to get the three points on Friday,” Davies said.

Davies said he said he can’t allow himself to be distracted during his first return home since the COVID-19 pandemic began, though he did see his parents. There are text messages with friends, but he said that this is first and foremost a business trip.

Herdman said he has a healthy group in camp. Striker Cyle Larin, with 20 goals in 42 career international games, missed training Wednesday with a stomach ailment, but is expected to be fine for Friday’s match.

Some members of the Costa Rican national team have been training together since last week. But the Costa Ricans waited till Wednesday to fly to Canada, and won’t train in Edmonton until Thursday afternoon. That won’t give them much time to acclimatize to the wintry weather, expected to be at about the freezing mark for kickoff Friday.

Before they left, Costa Rican players told their federation’s official website that they don’t expect the weather to be too much of a challenge. Defender Francisco Calvo, who currently plays for MLS side Chicago Fire, and previously played for Minnesota United, said that cold weather will “not be a surprise” to him. Defender Johan Venegas has also played in Minnesota and with the Montreal Impact (now CF Montreal).

Costa Rica’s biggest star is the team’s keeper, Keylor Navas, who plays at Paris St. Germain. But he will not be part of the team going to Canada because of injury.

‘For the greater good’: Indigenous financial advisor from Alberta works to empower others