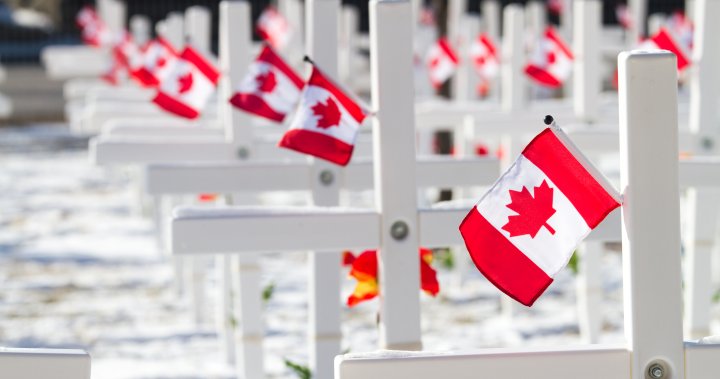 The annual Remembrance Day ceremony at the Field of Crosses Memorial Project will be held Thursday morning.

The ceremony will also be streamed live in this article during that time.

Read more:
2021 marks the 100th anniversary of the remembrance poppy

Each November, 3,500 crosses are erected along Memorial Drive to pay tribute individually to the thousands of southern Albertans who made the ultimate sacrifice defending our freedom.

In addition, a separate part of the park is set aside with 120 unique crosses for a special memorial to the 120,000 heroes from across Canada who lost their lives fighting for our country.

Indigenous veterans also played a vital role in the wars throughout the 20th century.

According to Veterans Affairs, an estimated 12,000 First Nations, Metis and Inuit people served while roughly 500 lost their lives.

Indigenous Veterans Day is now held on Nov. 8 to honour those soldiers who served.

“With all the serving members and contributions they’ve had, we really put an emphasis on that special day.”

Despite receiving decorations for bravery, many Indigenous veterans returned home after the First and Second World Wars to find that they did not receive the same benefits as their comrades.

“Back when they did serve, they weren’t allowed to serve without relinquishing their Indian status,” said community leader and veteran Marilyn North Peigan. “That was a very discriminatory act and what we call the building of systemic racism.”

“A lot of the Indigenous veterans did lose their status when they went overseas for four years and it’s just now becoming more recognized,” Jansen van Doorn said.

Sunrise and sunset ceremonies have been held each day since Nov. 1.