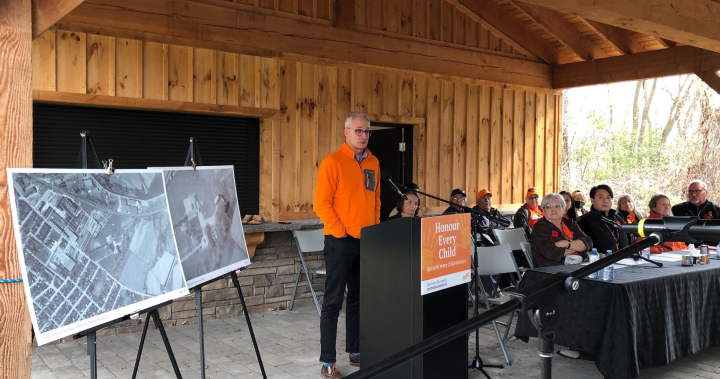 An area around a number of barns and buildings will be the starting point for survivors tasked with finding the remains of missing children who attended the longest-running residential school in Canada.

On Tuesday, the first phase of the quest began using ground penetrating radar to probe a 200-hectare parcel of land where the former Mohawk Institute was located in Brantford, Ont.

Dawn Hill, who attended the institute with her sister from 1957 to 1961, says looking back and uncovering long-forgotten stories helped map out the search area of the property that may be the most fruitful amid the exploration.

“So all of those stories are now coming to the forefront, and I think that’s why they’re starting where they are today,” Hill said during an on-site presser in front of the school.

“A lot of those stories focus on the boys’ side around those barns and buildings there.”

A Survivors’ Secretariat, looking into the deaths of children who died while attending the facility, revealed on Monday it had a search plan to cover an estimated 500 acres associated with the former church-run, government-funded school.

Executive lead of the Secretariat, Kimberly Murray, says the joint police task force — including Brantford Police, Ontario Provincial Police (OPP) and Six Nations Police — assisted with the layout of the grids to be followed by recently-trained community members operating the search technology.

“We have paired Six Nations police members with community members to operate the machines,” Murray said.

1:02
Students gather in Edmonton to honour lives of Indigenous children who died at residential schools

The data will be sent to archeological experts who are expected to produce a final report which will be shared with community members and survivors before being released to the general public.

In addition to help with a ground search, the Secretariat has requested aid from the federal and provincial governments in the form of records associated with the Mohawk Institute — things like death certificates and notices of transfers.

“There is simply no time for this nonsense of holding onto records. They must be released immediately.”

As of early November, Ontario was in the process of releasing death records of approximately 1,800 Indigenous children to the National Centre for Truth and Reconciliation.

A National Student Memorial, which claims 4,127 children did not return from residential schools, has suggested there are potentially thousands more records still in the hands of the various levels of government.

It’s estimated around 150,000 children were placed in residential schools across Canada with many survivors accusing the system of physical and sexual abuse.

Hill says violence was something she experienced during her time at the former Brantford school.

“If they heard you talking, they’d call you down and strap you, which left big welts on your hands,” recalls Hill.

“Nobody ever hugged you. Nobody ever said something really nice to you.”

The province’s Progressive Conservative government recently announced a $10 million top-up to an initial $10 million it pledged in June for the investigations into unmarked graves in Ontario.

The search at the former Mohawk Institute, which operated from 1831 to 1970, is expected to take months – possibly even a year.