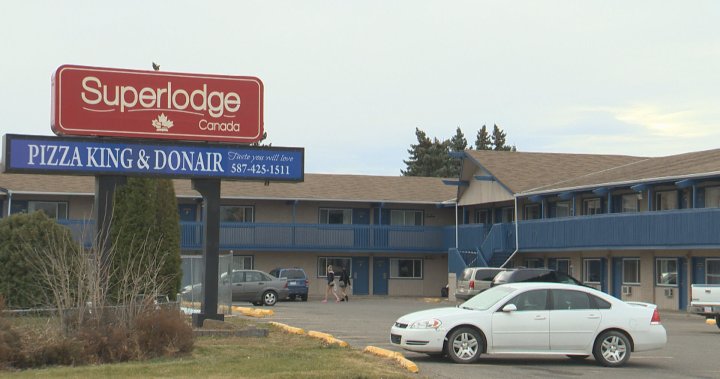 It’s a problem that has continued to escalate over the past three years, according to some south side Lethbridge residents.

“It’s not an abnormal occurrence to see someone using drugs, someone on drugs in the process of tweaking out (or) who’s overdosed and we need to call the ambulance,” Cayley Pierzchala said about her Victoria Park neighbourhood.

“Myself and my kids are subject to that. They’re seven and eight years old.”

The area is seeing more and more illicit activity, including a shooting incident in September that forced a lockdown of a nearby elementary school.

Pierzchala says the increase can all be connected to one place: the Superlodge Motel.

“The Lethbridge Police Service has actually had several big drug busts at the Superlodge,” Pierzchala said. “The issue is they will bust someone and they move them out and someone new just moves in. There’s zero accountability to the Superlodge.”

Pierzchala has told her children not to touch things in the street and says the alley between her home and the motel is often lined with needles and other drug paraphernalia.

“My daughter has been afraid to even travel to the car, because she sees people in the alley and we know that they’re dangerous and we’ve had to talk to them about safety issues,” Pierzchala said.

“They don’t get to just feel comfortable. If they want to go to the backyard we’ve got a camera back there and they don’t go unless they bring the dog with them.”

“This is growing exponentially from three years ago when it seemed like the Superlodge was a very responsible member of our community to what I refer to now as crime central,” George Hufnagel, who has lived in the neighbourhood for 15 years, said.

Lethbridge Police confirm they are very familiar with the business and recently seized $25,000 in drugs, including meth and cocaine, in a raid at the motel on November 4th.

Officers attended the Superlodge 92 times in 2019. That number jumped to 218 last year and has already been surpassed with 232 visits so far in 2021.

That includes more than 50 visits alone since August.

Insp. Russ Lawrence says resources will continue to be dedicated to the area, but could not speak to specifics.

“We can target certain locations where it looks like police presence may be required or combat crimes when those numbers are up,” he said.

The concern among residents is with the increased violence, someone may end up caught in the crossfire.

“What happens if one of the young children is hit by a stray bullet?” Hufnagel asks.

“What happens if someone looses a life?”

Lawrence adds it’s not only the residents being affected, but the people coming to the motel as well.

“They been gravitating towards the (Superlodge), using the alleyway to camp in and spend their evenings and I think they’re victims more than we are because the drug dealers are preying on these people.”

A group of neighbours has contacted the hotel chain, but isn’t finding them overly cooperative.

“I would want to know what they’re going to do in the future to ensure this stops happening,” Pierzchala said.

A question that — for now — will remain unanswered after the general manager of the Superlodge Motel declined to be interviewed or provide a statement for this story.