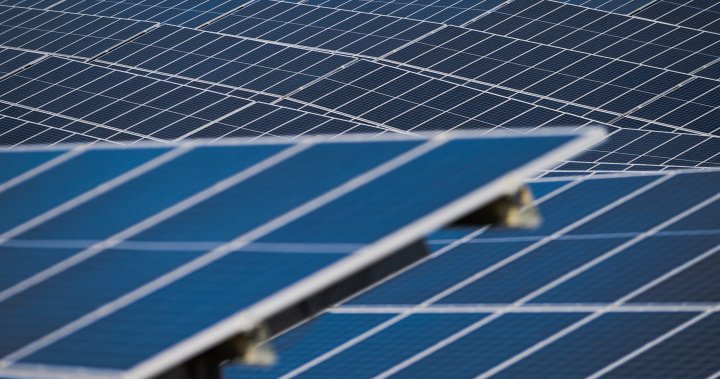 The solar farm will be the first in Canada to be built, owned and operated by Tennessee-based Silicon Ranch, which is 47 per cent owned by Royal Dutch Shell and building solar projects for the global energy giant all over the U.S.

Shell Canada previously built a five-megawatt solar farm at Scotford that will start up this fall and offset emissions from the Shell-owned chemicals plant.

The project announced Tuesday — which Shell says will begin construction next year and be operational by the end of 2023 — will be much larger.

In an interview, Shell senior vice-president Mark Pattenden said all of the power generated by the new solar farm will be dedicated to the Scotford refinery, for at least the next 25 years.

The solar farm is expected to produce enough renewable electricity to provide 20 per cent of the refinery’s energy needs.

“This is really material decarbonization, of either the existing products we produce through the refinery … or it creates the opportunity for future production of things like hydrogen or biofuels as well,” Pattenden said.

Shell has said it wants to transform the Scotford Complex into one of five energy and chemicals parks owned by the company around the world.

Within this decade, the company wants to use carbon capture and storage (CCUS) and renewable power to process new feedstocks such as bio-oils or waste oils to reduce the C02 emitted in the production of fuel.

As part of its vision, Shell has proposed its Polaris CCUS project, that will capture carbon dioxide from the Scotford refinery and chemicals plant, with storage capacity of about 300 million tonnes of C02. Shell said it will make a final investment decision about the project in 2023

Shell also has plans to collaborate with Mitsubishi Corp. on the production of low-carbon hydrogen at Scotford.

The proposed solar farm at Scotford won’t require any government subsidies or funding.

Pattenden said as the company moves forward with its goal of reducing direct and indirect carbon emissions by 50 per cent by 2030 compared with 2016 levels, what it needs most is regulatory certainty around things like carbon pricing and renewable energy policy.

“We continue to look not so much for specific policy, but more certainty,” Pattenden said.

Read more:
Solar energy in southern Alberta: ‘The best place in Canada to do this kind of work’

The Shell Scotford Complex is located northwest of Edmonton near Fort Saskatchewan, in an area known as Alberta’s industrial heartland.

The construction of a solar farm near Scotford will mark the first large-scale solar installation in the industrial heartland, Pattenden said, noting solar farms are typically built in the southernmost portion of the province.

But he said there’s no reason a solar farm can’t produce effectively at Scotford, pointing out it will be designed with panels that can also capture sunlight reflected off snow.

“It’s without a doubt that southern Alberta is one of the best places in the world (for solar power) but the Edmonton area is not far off,” Pattenden said.

“We do have shorter days in the winter, but longer days in the summer offsetting that, and just about as many sunshine hours as southern Alberta.”

Silicon Ranch will provide all of the capital investment for the solar farm. A spokesperson for that company did not reply to an email inquiry about the total dollar value of the project in time for deadline.

Read more:
Suncor and Atco working together on potential hydrogen project near Edmonton