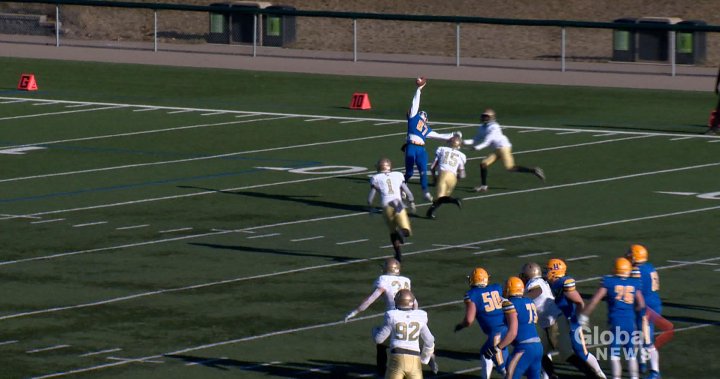 The smiles, the celebration, the screaming, the pure jubilation, none were containable along the Saskatoon sideline after Jaxson Funk snagged an interception at the line with 20 seconds remaining to secure a 33-31 Hilltops victory over the visiting Edmonton Huskies on Saturday at Saskatoon Minor Football Field.

The rambunctious crowd applauding and stomping their approval after an afternoon of emotions that took all invested on a wild roller coaster ride.

“I would honestly have to say so,” receiver Dillan Heintz explained. “It was pretty exciting and nerve wracking and it’s just good to come out with a win.”

“I’ve had a few, I don’t know,” Head Coach Tom Sargeant admitted. “That’s just who this team is you know, at the end of the day they played hard.”

Playing hard was required of his squad on the crisp Sunday afternoon at SMF Field, as the team trailed multiple times throughout the game, including a 10-point deficit at half-time.

However, the blue and gold battled their way to a tie game before kicker Teijon Able-Douglas booted a 23-yard field goal with 2:58 to play in the game that put the Hilltops up by three.

What followed could’ve spelled disaster as the Huskies took the next 1:40 to march down the field and connect on a 22-yard touchdown pass from Declan O’Flaherty to Adner St. Hilaire to retake the lead.

But, with 1:18 left on the clock, the Toppers organized a game-winning drive filled with precision, dedication and hard work — including a 33-yard completion between Damon Dutton and Lochlan Horsely that moved the Hilltops to the Huskies 24-yard line.

Four plays later, a diving Dillan Heintz hauled in a five-yard touchdown that cemented victory for the Hilltops, who move on to play in their seventh-straight PFC Championship game.

“I’ve never seen anything like that,” Safety Brant Morrow admitted. “The highs and the lows, them scoring and going up by four and then our touchdown, it’s just a super emotional thing.”

“It’s tough to beat a team three times,” Sargeant added. “We were able to do that because we just stayed together, we had a good belief system and it was pretty awesome at the end to see the guys rally around each other.”

The group was lead into battle by their few veterans who made big plays late in the game, when it mattered most. Morrow came away with a pair of huge interceptions in the fourth quarter, while offensive lineman Mason Ochs outraced an Edmonton defensive back to recover a fumble in the latter stages of the game.

Both did their part to ensure that they would play another game in the blue and gold.

“That’s a good way to put it,” Sargeant said. “You know that play by (Ochs) was just massive but that’s who he is, one of the best we’ve ever had.”

“These guys, they come out here and this could be their last game,” Heintz added. “So everyone’s just grinding out to play for them and win for them.”

This young Hilltops team’s ability to grind out a gutsy victory like Saturday’s performance will only help to serve the team going forward.

“When they’re tough, you know, there’s definitely a different feeling,” Morrow admitted. “It’s always nice to win, but when you’ve got to grind it means more to you, just like anything in life.”

“For this team, for this new identity, this is what they needed to do and they did it, so we’ll just enjoy that and learn from that” Sargeant said. “Hopefully in the future we don’t have to manufacture these things at the end (of the game) to keep living.”

Even after the high of winning such a tightly-contested game, the Hilltops now have their sights set on their PFC Championship opponent, provincial rivals the Regina Thunder, the lone team to beat the blue and gold this season.

“We didn’t play well against them in our first two games,” Heintz said. “We’ve just got to come out hot to start, honestly. Our coaches are going to have a good game plan and past that it’s just on us to do the work and make the plays.”

“They beat us twice with one play each game so at the end of the day we need to tidy up, tighten up and play smarter physical football,” Sargeant explained. “We’re excited to head down to Regina to keep moving this show.

“People keep forgetting that we’re the six time (defending) national champs so we’re going to play with even a little more swagger especially after a win like this. We needed some confidence and we got it today.”