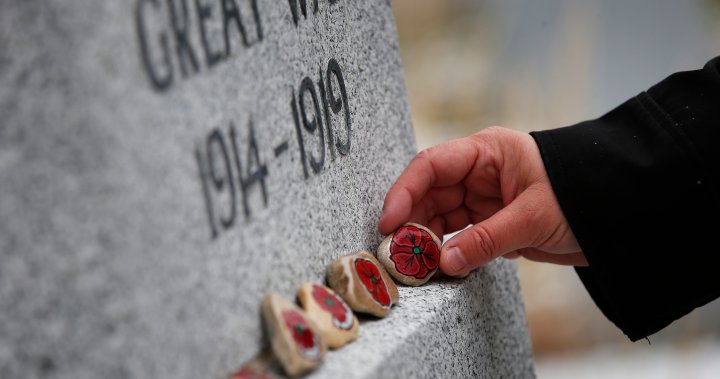 Across the province on Monday, ceremonies and gatherings were held to mark Indigenous Veterans Day.

At the Alberta legislature in Edmonton, there was a reminder of the important role Indigenous people have played in armed conflict.

“I think that people need to recognize that throughout many conflicts, First Nations people have stepped up, defended this country and its values and fought against tyranny around the world,” said Brad Rutherford, an MLA and military liaison to the Canadian Armed Forces.

In Calgary, a sunrise ceremony was held at the Field of Crosses along Memorial Drive, paying tribute to the thousands of Indigenous men and women who have the served in the past and present.

Read more:
2021 marks the 100th anniversary of the remembrance poppy

At the Military Museums in southwest Calgary, approximately 70 people were on hand for a ceremony, with stories from veterans intertwined with traditional Indigenous singing, dancing and drumming.

“This was the first one I was able to participate in as manager,” said Military Museums director David Peabody.

“Obviously it’s a very important thing that we recognize the contributions of our Indigenous veterans.”

One of the veterans in attendance was Clarence Wolfleg Sr., who joined the military at 17 years of age and has been a part of multiple peacekeeping missions.

On Monday afternoon, he thought about the influence of his father, Second World War veteran Mark Wolfleg Sr.

“My family is quite involved in the military,” Wolfleg Sr. said. “I guess I’m the only other one that went overseas into the battlefield like my father.”

Wolfleg Sr.’s son, Clarence Wolfleg Jr., said he feels a deep sense of pride in what his grandfather and father did for Canada and all First Nations people.

“It’s very inspiring,” Wolfleg Jr. said. “It makes me realize the world we’re in right now, and to be thankful for everything we have.”

While Remembrance Day attracts a great deal of attention, Wolfleg Sr. said Indigenous veterans should be just as important.

“We have to work together to know each other and to also strive ahead for a good future for our little ones,” Wolfleg Sr. said.