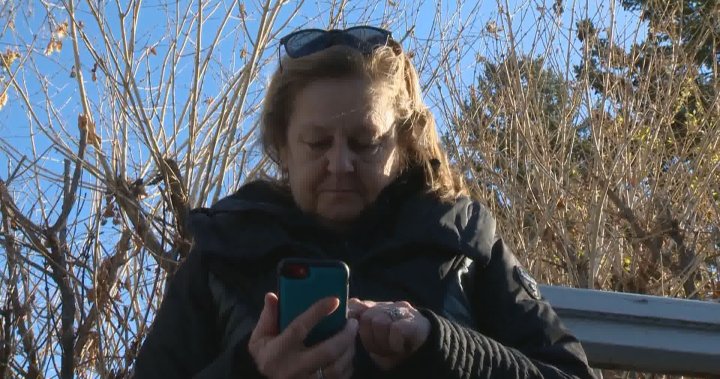 A new twist on an old scam has cost a Calgary woman her entire savings: $23,000.

“I went to the bank and took cash out like an idiot,” Deanna Thoms told Global News. “I took cash out on my credit cards, I drained my savings.”

Thoms said it all started when she received a call last week from someone claiming to be with the Canada Border Services Agency. The caller told her several packages bearing her name and address had been flagged for illegal activity and illegal contents.

“They had drugs, money and I believe they said weapons.”

Thoms said she was then directed to go to her bank and get all of the cash. The entire time she was at the bank, the scammer was sending her texts telling her what to say and when to say it. She added while she wished the bank had asked her what was going on, she doesn’t blame them.

“I have nobody to blame but myself,” she said.

Thoms said she did get very suspicious at one point over the two-day ordeal and questioned the caller about the legitimacy of the call.

She said she was told an investigator with the Calgary Police Service (CPS) would contact her directly to verify what was going on. She received one call, but because it came from a private number, she still had questions. She said she was then contacted again, this time by someone using the CPS non-emergency phone number.

“He contacted me from the station, the phone number to the police station, so I believed it.”

“Why wouldn’t I?” she added. “It came from the police station. I had no reason not to believe it.”

Now she wishes she had called the number back herself.

“In reality, the CPS non-emergency number will never show up on a call display, even if the call originates from the Calgary Police Service. The call display will show up ‘blocked,’” the spokesperson said.

The Canadian Anti-Fraud Centre (CAFC) has recently put out an alert as well, warning these types of frauds are not only evolving but escalating.

“They try to make you believe that a package addressed to you was intercepted by Canada Post containing illegal substances.”

The CAFC added the scam is similar to others previously reported Service Canada, Canada Revenue Agency (CRA) and RCMP telephone extortion scams and that any recipient should ignore any of these calls.

Thoms told Global News she still can’t believe she fell for it, but added the scammer knew a lot of personal details about her, including the fact she was once again dealing with a cancer diagnosis.

‘They knew things about me so I believed it. There’s things that nobody should have known, and they knew,” she said.

“Mentally, I was at the bottom of the barrel pretty much, and they just got me. I just don’t know what to say.”

What they didn’t get was more of her money — despite trying again. Thoms said they followed up with another request for $7,900 to pay for a “special prosecutor.”

“Uh no,” she said. “That’s when I snapped back into reality and I knew that I had been taken.”

She hopes by speaking out she can spare others the same fate.

“If I can save one person from this, then all this humiliation of putting my face out there is worth it.”