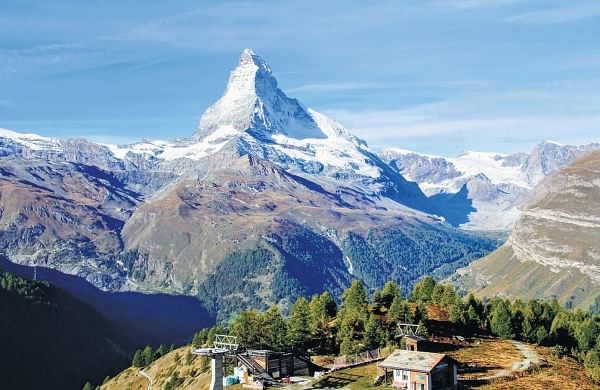 In Zermatt, an Alpine town in the canton of Valais in Switzerland, the Matterhorn is everywhere. The 4,478-metre tall mountain that looks like a slightly crooked pyramid, looms over the town visible from virtually every nook and corner. Indoors, it made its presence felt in different ways. It was beside my bed on the wall as a metal installation. It was on the cover of the artisanal handmade chocolate bar kept in my room to welcome me. If not for the early explorers drawn to the Matterhorn, perhaps Zermatt would not have become the swish ski and mountaineering destination that it is today.

Until the mid-1800s, Zermatt was an obscure farming village. Besides a handful of scientists who visited to study the unique geology and flora of the valley, the village had hardly any visitors. Its fortunes changed in 1865 when a group of four English climbers—Reverend Charles Hudson, Edward Whymper, Lord Francis Douglas and Douglas Robert Hadow—along with three guides set out to summit the Matterhorn. There were two groups—one from Italy and the other from Switzerland making a race for the top, oblivious to each other’s presence.

The group from Switzerland was the first to scale the mountain, considered to be one of the toughest to summit till date. However, they met with a tragic end as only three of the party of seven made it back safely. A board in the Matterhorn Museum says, “During the descent, 100 metres below the summit, at an exposed, steep and snow-covered spot, Hadow slips and pulls the leading guide Michel Croz down with him.

Their combined weight catapults Hudson and Douglas, who are descending behind them, from their positions.” Moments before, local man and guide, Peter Taugwalder Senior, had tied the rope holding them around a rock. This helped Whymper, Taugwalder Junior, one of the other guides, and Taugwalder Senior keep their footing. As luck would have it the rope snapped and Hadow, Hudson, Douglas and Croz plunged down the glacier. Widely reported, the incident garnered a lot of attention. There were many conflicting reports of the exact events that unfolded on the slopes of the Matterhorn and to this day there remain many unanswered questions.

The tragedy aside, Whymper was hailed to be the first person to have successfully summited the Matterhorn. His feat turned the spotlight on Zermatt attracting a large number of British tourists to the village. Grand new hotels began to be built catering to the needs of the elite visitors. To this day, Zermatt continues to be a popular Alpine destination attracting people from all over the world. Mountaineers and those looking for active holidays flock to the town as it offers easy access to the 29 four-thousand-metre peaks of the Alps.

Wooden chalets with window sills overflowing with bright geraniums built on either side of the Vispa stream greet visitors in the summer months. Come winter and the town turns into a snow-covered wonderland. Records continue to be set and broken on Zermatt’s snow-covered peaks. The Matterhorn Museum offers an insight into the many expeditions that have taken place over the years. From that first ascent in 1865 of the Matterhorn, a lot has changed. The equipment used today is top notch and there are stringent safety measures in place, ensuring accidents don’t happen.