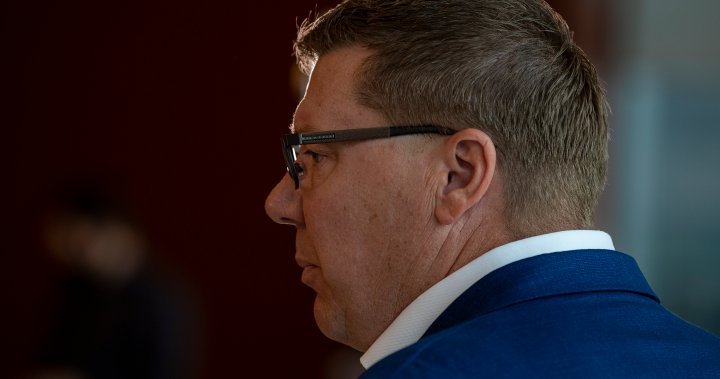 Saskatchewan Premier Scott Moe will remain leader of the Saskatchewan Party after more than 80 per cent of the party’s membership supported the premier’s leadership.

Moe faced the leadership review during the Saskatchewan Party Convention on Saturday at TCU Place in Saskatoon. Leadership reviews are customary at the convention.

As part of its constitution, the party does not release the exact percentage of the vote if it is over 80 per cent.

The event was scaled back due to the pandemic. Attendees had to provide proof of vaccination or a negative COVID-19 test and were required to wear masks except when eating, drinking or during speeches.

During his speech before the leadership review vote, Moe largely spoke about the party’s success in the 2020 provincial election and his party’s commitment to economic recovery.

He also credited projects over $10 million that have been committed to that will create jobs in the community.

The severe drought over the summer and the COVID-19 pandemic have been the two toughest challenges the province has faced, Moe stated.

He admitted that the government’s response has not been perfect “every step of the way,” mentioning that some people think his party has gone too far and others think the party has not gone far enough when it comes to COVID-19 policies.

Moe speculated what the province would look like if the Official Opposition was in power instead.

Ryan Meili clarified on Saturday that the Saskatchewan NDP does not want to see a vaccination requirement for school-aged children at this point.

“We hope to never be at a point where that was a requirement,” Meili said. “The decision of the Sask. Party, however, to try to seek this out as a wedge to try to spin their way out of their own record is really disgusting.”

Saskatchewan Party members had the chance to ask elected officials questions on Saturday afternoon before the end of the convention.

Questions came up about the party’s objectives and responses to the addictions crisis, oil and gas, diversity, COVID-19 and the surgery backlog in the health-care system.

The Saskatchewan Party convention is held every two years and features a speech from the president and leader, leadership review vote and policy review.

Outside of the convention, members from the Concerned Citizens for COVID Action group rallied, voicing concern for residents. Organizer Theresa MacKinnon called for the premier and health minister to take action or resign.