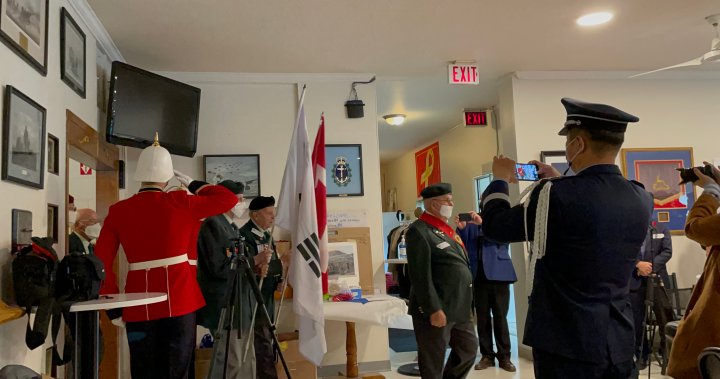 War veterans and members from the Korean embassy were in attendance in Kingston, Ont., Saturday to pay tribute to veterans of the Korean War.

It was the first time people were able to gather in a safe manner since 2019 – the 2020 event was cancelled amid the second wave of the COVID-19 pandemic.

Major Justin Yoo, who also emceed the event, shared how important the celebration is.

The event featured speeches from military kids as well as military personnel. There were also mentions from Bay of Quinte MPP Todd Smith and Belleville Mayor Mitch Panchiuk, who were in attendance.

Yoo noted that Canada has one of the highest populations of Korean people, behind Korea, the United States, China and Japan. He said as a Korean Canadian, this event is emotional for him.

“As an immigrant from the Republic of Korea and coming to Canada at a young age, being able to show our appreciation for the veterans and for the opportunities I have been given and the opportunities that I’m able to give my children is phenomenal,” Major Yoo said.

More than 26,000 Canadians served in the Korean War and the Consulate General of the Korean Embassy said Koreans everywhere will always remember the sacrifices made.

“The government and people of Korea will never forget the Korean War veterans and their contributions to the freedom and prosperity that we enjoy today,” Kim Deuk Hwan said.

“The Korean War being referred to as the Forgotten War – it’s certainly not forgotten to us and its been great to see the veterans and take the day to reflect on the sacrifices including the 516 that made the ultimate sacrifice,” Yoo said.