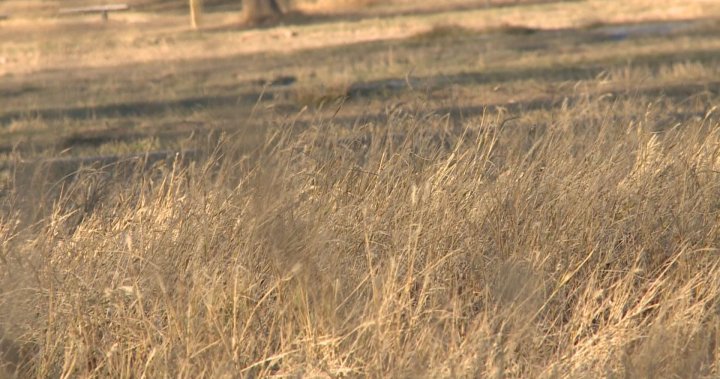 Despite the wildfire season officially coming to an end on Oct. 31, southern Alberta residents are still being reminded of the continued risks present in the fall.

According to Byron Fraser, the fire services coordinator for Lethbridge County, wildfire season isn’t over for them.

“For us out in Lethbridge County it’s actually kind of the worst time of year,” Fraser said.

“All the grass is getting really cured, and we get all the winds in the fall, and if we don’t have snow on the ground everything’s super dry.

“Leaves are falling off, and that’s one of the biggest things is people not keeping their yard clean near their house.”

Read more:
62% of Alberta wildfires were caused by humans in 2021

Fraser explained 2021 has been on par with previous years when it comes to the number of wildfires, with a slight spike in hay fires.

The City of Lethbridge continues to have a fire ban in the river valley, which it said is due to both dry conditions and to help prevent social gatherings during COVID-19.

It’s not clear when that ban will be lifted.

“Right now in Lethbridge County we do not have a fire ban on at all,” Fraser said. “We always encourage people to use caution and everything.”

In March, large grass fires caused the evacuation of Carmangay residents, which he believes to be the most impactful blaze this year.

“That was a pretty big fire that most of southern Alberta was involved in.”

Province-wide, there were fewer hectares of land burned, and fewer human-caused fires than in 2020.

Alberta Wildfire assisted with 36 fires outside the Forest Protection Area, which encompasses much of northern Alberta and the Rockies, all the way to the Canada-U.S. border.

Sixty-two percent of those wildfires were caused by humans, while 33 per cent sparked from lightning, and a further five per cent are still under investigation.

In 2020, nearly 90 per cent of wildfires in the province were caused by humans.

“I think that highlights the importance of prevention work and realizing that every Alberta that goes out into the forest has a (duty) to be responsible with any kind of campfire that they start,” she added.

“Making sure to always extinguish them fully before they leave the area because that remains one of the main causes of wildfires in the province.”

St-Onge explained while the number of fires this year is in line with the five-year average, there was less area burned altogether.

She attributes this to fast response times, preparedness, and prevention.

“One of the things that we did see this year that was encouraging was that our fire bans and fire restrictions that we put in place — specifically in the southern part of the province, which has a much higher fire danger for longer periods of the summer — were well respected by Albertans.”