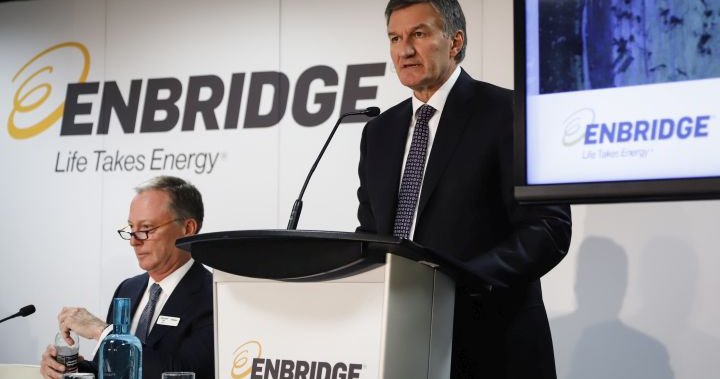 Soaring heating prices in Europe and an electricity crisis in China are proof that the global transition to a low-carbon economy needs to be driven by a “mix of balanced policy solutions,” the chief executive of pipeline giant Enbridge Inc. said Friday.

In a conference call with analysts, Al Monaco said that post-pandemic supply disruptions and high demand for both oil and natural gas are proof that economic growth is dependent on conventional energy. He said the energy crunch being experienced right now in parts of the world is a direct result of a failure to invest in energy infrastructure.

“This energy crisis that we’re in right now is entirely about underinvestment in all forms of energy, which is creating havoc with consumers, industrial competitiveness and inflation,” Monaco said.

“It’s clear if it wasn’t before, that conventional energy will be a critical part of the supply mix for a long time.”

Watch below: Some Global News videos about natural gas.

Enbridge, which Monaco said views itself as a “bridge” to a cleaner energy future, has been transitioning its asset mix toward lower-carbon sources of energy for several years. It has significantly expanded its natural gas business and connections to LNG markets, built up a renewables business, and is now investing in hydrogen, renewable natural gas, and carbon capture, utilization and storage (CCUS).

While the energy transition is real, Monaco said, governments must be “thoughtful” about the pace and scale of execution, keeping the consumer in mind.

“Most important, in our view, we have to embrace natural gas because it’s simply the enabler of building more wind and solar supply, among other things. And it’s a great source of reducing emissions just like it has been to this point,” he said.

Monaco said the key to the transition will be incentivizing consumption-based economy-wide emissions reductions and efficiency measures. He also called for an immediate focus on “regulatory certainty” and support for CCUS investment.

“We’ve probably got $2 billion in flight now in terms of the energy transition category. And I would say that over the next five years, you’re probably looking at that same level — call it $1 billion a year,” Monaco said. “I think what’s to be determined, though, longer term, is how fast hydrogen and other areas like CCUS develop.”

Gas prices in Europe have increased by more than 170 per cent since the start of the year, mainly due to surging global demand for energy, and gas in particular. EU member states are at odds on how to respond to the supply crunch in the long term.

In China, local governments have been doubling down on meeting energy consumption targets set by Beijing in September to ensure China’s carbon emissions peak by 2030. Factories and companies were ordered to reduce or even halt production temporarily.

Enbridge Inc. reported a third-quarter profit of $682 million, down from $990 million in the same quarter last year.

The pipeline operator says the profit amounted to 34 cents per share for the quarter ended Sept. 30, down from 49 cents per share a year ago. Operating revenue grew to $11.47 billion compared with $9.11 billion.

Analysts on average had expected an adjusted profit of 57 cents per share, according to financial markets data firm Refinitiv.

During the third quarter, Enbridge successfully brought its Line 3 pipeline replacement project into service. The 1,765-kilometre, $9.3-billion project will carry oil from Alberta to Enbridge’s terminal in Superior, Wis.

Watch below: Some Global News videos about Line 3.

4:04
What does completion of Line 3 pipeline project mean for Alberta?

What does completion of Line 3 pipeline project mean for Alberta? – Oct 1, 2021

“We closed the transaction a few weeks ago now, but I would say our Q4 outlook and our ’22 outlook is quite encouraging. We’re seeing export loadings ramping up quite nicely and in line with upstream drilling rig account trajectory,” Monaco said Friday.

Enbridge also announced the appointment of former Aera Energy chief executive Gaurdie Banister and Jane Rowe, vice-chair of investments at the Ontario Teachers’ Pension Plan, to the company’s board of directors.

The pair replace Marcel Coutu and Maureen Kempston Darkes, who stepped down from the board on Monday.