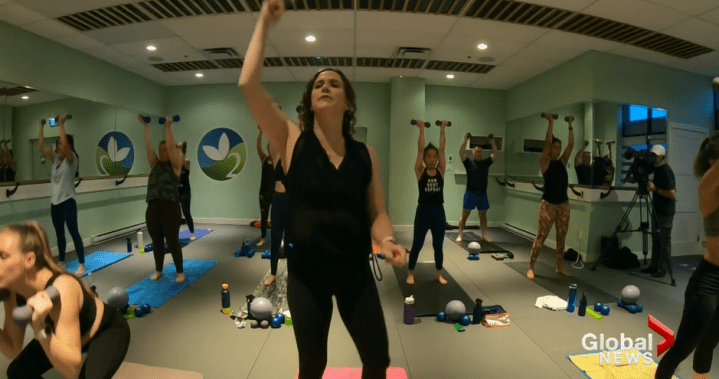 From the front of her yoga class in Vancouver, Victoria Heard projects strength, focus and confidence as she leads a group through an afternoon workout.

Heard wasn’t always so grounded. Until two years ago she was on the losing side of a nearly two-decade battle with addiction that saw her in and out of detox and at times perilously close to death.

“When I started my yoga training I had a lot of fear around it. I never finished high school; I never completed anything. But I just knew this is what I wanted to do,” said the 32-year-old, who along with her regular classes now also teaches at recovery houses.

“It’s really helped me just find myself and centre myself.”

Read more:
Stories from the other side: Voices of addiction and recovery

Now two years sober, Heard is sharing her story in the hopes she can inspire others and burst some of the persistent myths and stigma around addiction.

Her story started as a 13-year-old living in a comfortable suburban Metro Vancouver home. There was no trauma or abuse, she said, but a desire to experiment that started with crystal meth and grew to include a variety of street drugs, ending with opioids.

“I chose to leave a loving home, to drop out of school and live on the streets of downtown Vancouver so I could do drugs all day, every day,” she said.

She spent four years on the streets of Vancouver panhandling and living in Single Room Occupancy hotels before her parents put up $30,000 to get her into a recovery program.

2:31
Mother of teen actor Logan Williams speaks about his struggles with drugs and his death

Mother of teen actor Logan Williams speaks about his struggles with drugs and his death – Sep 10, 2021

Not long after she was out, she faced the first of several relapses.

Over the next decade, Heard said she entered detox several times, struggling each time to hold on. Eight months after giving birth to her daughter, she relapsed and made the excruciating decision to put her child in her parents’ custody.

“Every time it gets worse, and things intensify, and you do things you said you’d never do, and you’re just right back into the turmoil and the misery,” she said.

“I didn’t understand the severity of the disease of addiction … There needs to be constant work in my life every day to improve how I feel, not listen to what my head tells me. I just didn’t get it.”

B.C.’s toxic drug crisis has claimed nearly 8,000 lives since the province declared a public health emergency in 2016, some of them Heard’s friends.

She told Global News she came close to becoming a statistic herself — nearly fatally overdosing in her truck one night.

“I pulled over on the side of the road, these two bicyclists saw me OD’d, pulled me out, gave me CPR, called an ambulance — they saved my life,” she said.

“But the craziness of addiction, after I got released form hospital, I went back to my truck, found the drugs I had dropped on the floor, went home and got high.”

The turning point came in September 2019, when Heard had finally had enough.

2:34
Experts call for removal of barriers to safer drug supply in B.C.

“I was so tired of being miserable and hating myself and hurting my family and not being there for my daughter and I was just exhausted … The people that you surround yourself (with) and the places that you have to go to get your drugs, I was just so tired of it and I just couldn’t do it anymore,” she said.

“There’s a couple of times where I put myself into detox went to treatment. This last time, I got clean on my own, detox on my own and I’ve been clean ever since.”

Speaking from her own experience, Heard said the biggest obstacle in the province’s fight against the drug crisis is the gap between accessing detox and treatment.

Read more:
‘I was the little Indian foster kid’: Story of intergenerational trauma, addiction and recovery

She said she’s spent over a month just waiting to get into detox, and that others have waited several times longer to get into treatment facilities, particularly if they don’t have the kind of financial resources her family was able to marshal.

“You get into detox, you have that drive and will and you want to get clean and change your life, and possibly there isn’t a (treatment) bed available. So you leave detox and you have nowhere to go,” she said.

“Everyone deserves a chance at life and I’m sure there are a lot of people who want to get clean and can’t afford it.”

With more than two years clean, Heard is now laser-focused on her dream of owning her own fitness studio, being a mother, and giving back.

She says she hopes her own success story can help others who are fighting a sense of hopelessness.

“A big part of it is access and resources, but the other part is finding that strength within — everyone that’s out there that’s struggling with addiction deserves a life,” she said.

“It’s really hard to see that when you’re in it (but) everyone has that ability to pull out and find a better life.”