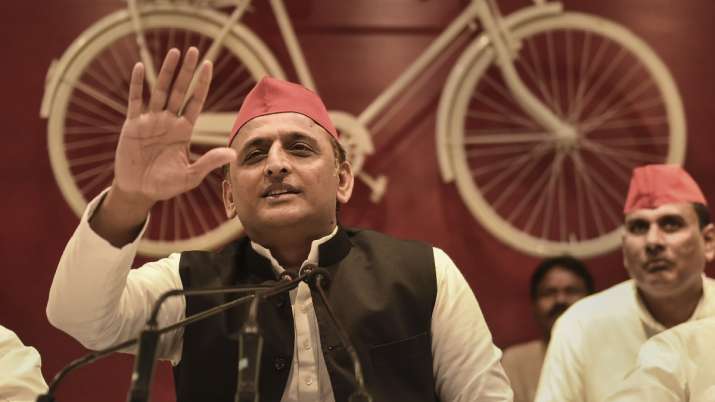 Samajwadi Party chief Akhilesh Yadav on Saturday, reacting to Uttar Pradesh Chief Minister Yogi Adityanath’s comment that he is ready to contest polls from anywhere in the state, said that he should not contest elections as he was on his way out.

​”Now, ‘Baba Mukhyamantri’ should not contest the elections. He is going (out). Now, what has to be done with a person who is going out,” he said. Asked whether he will be contesting the upcoming Uttar Pradesh assembly elections, Yadav said the decision is for the party to make but indicated he is not averse to the idea.

Speaking further ahead of the 2022 UP elections, the SP chief said, “Law and order were never so bad in Uttar Pradesh as it is today. The custodial deaths are highest in Uttar Pradesh. NHRC has sent the maximum notices to Uttar Pradesh. There is no police modernization.”

On Adityanath inaugurating a jail in Etawah, Yadav said the act was just one of the many done in the recent past to appropriate previous government’s achievements and renaming things.

Akhilesh Yadav also sought to defend his Muhammad Ali Jinnah remark as he hit out at his detractors, asking them to read history books again.

On Sunday, Yadav courted controversy when he named Jinnah, along with Jawaharlal Nehru, Sardar Vallabhbhai Patel, and Mahatma Gandhi, saying they had helped India achieve independence and never shied away from any struggle. He had also said the three leaders studied at the same institute for their barristers.

Asked by reporters here on Saturday at the inauguration of the office of ally Janvadi Party Socialist about that row, Yadav shot back, “Why should I say the context? I would say read the books again.”

His comments drew a sharp response from Uttar Pradesh BJP chief Swatantra Dev Singh, who in a Hindi tweet said, “The love for Jinnah still remains intact. Akhilesh Yadav ji please tell which history books have to be read — the Indian or the Pakistani.”

Singh had earlier said that glorifying Jinnah will prove costly to Yadav, as the country still considers Jinnah a “villain”.

Asked the purpose of a recent meeting between Priyanka Gandhi Vadra and RLD’s Jayant Chaudhary at the Lucknow airport, Yadav downplayed the matter saying there was nothing more to it than bumping into someone at a restaurant.

The SP leader chose to sidestep the question of any possible poll alliance between his party and Rashtriya Lok Dal (RLD). “Why should I tell? You are a friend, but the problem is that through you, the BJP will come to know about it. For this very reason, it has not been disclosed now,” he said.

On speculation about SBSP chief O P Rajbhar giving a ticket to mafia don-turned politician Mukhtar Ansari (currently lodged in Banda jail), he said it was not based on facts.

“O P Rajbhar is our ally, and as of now you do not have the information about tickets,” Yadav said. When reminded of a recent comment by Adityanath, where he said those who fired upon ‘karsevaks’ will be made to stand in line for ‘karseva’, Yadav said the chief minister should see the temple the previous government (his) built at the chief minister’s official residence.

“Next time you meet the chief minister, please request him to show you the most beautiful temple constructed at his residence by the previous government, so that you can have a glimpse also.

“If the chief minister has seen a better temple than it, then he should tell all of us. And this temple was made without a map,” he said.


Adityanath was apparently referring to an incident from 1990 when the then Mulayam Singh Yadav’s government ordered to open fire against ‘karsevaks’ who had gathered in Ayodhya to march to Babri Masjid.

(With inputs from PTI)

ALSO READ | Akhilesh Yadav may even convert to get Muslim votes: UP minister

ALSO READ | ‘He should understand that Indian Muslims have nothing to do with Jinnah’: Owaisi slams Akhilesh