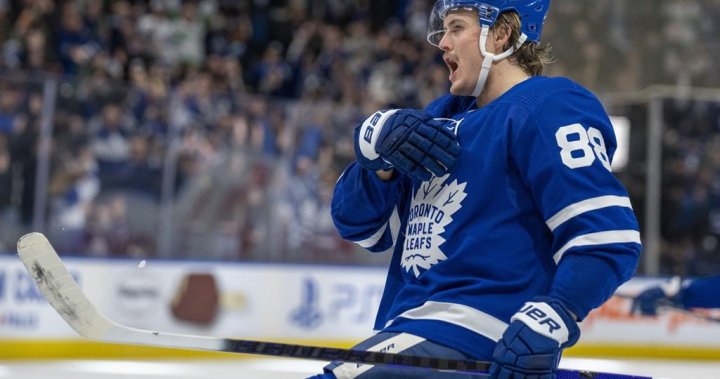 TORONTO – Having watched his team fumble away a 5-on-3 power play in the first period against the two-time defending Stanley Cup champions, Maple Leafs head coach Sheldon Keefe had a simple message for his ultra-skilled forward group when Toronto got a man advantage in overtime Thursday.

Don’t look for the perfect shot.

“As it turned out,” Keefe said with a smirk, “we ended up finding the perfect shot.”

William Nylander blasted home the winner at 3:43 of the extra period as the Leafs defeated the Tampa Bay Lightning 2-1 to pick up their fourth straight win.

“Auston (Matthews) gave a great pass right in my wheelhouse,” the winger said after burying his team-leading fifth goal of the season. “I just wanted to rip it.”

John Tavares tied the game late in regulation for Toronto (6-4-1), which got 24 stops from Jack Campbell.

Matthews and Mitch Marner had two assists each as the Leafs responded following an sluggish opening 20 minutes to grind out a statement win.

“We were just a little shy in the first,” Keefe said. “We didn’t assert ourselves at all, in any way.”

Tavares tied the game off a Marner setup with 41.1 seconds left in the third and Campbell on the bench for an extra attacker after Andrei Vasilevskiy had frustrated Toronto all night.

Tavares was then slashed on a breakaway by Lightning captain Victor Hedman in OT, and Nylander thumped that one-timer past the Tampa netminder’s blocker on a 4-on-3 man advantage.

“Good job just sticking with it,” said Tavares, whose team’s four-game win streak comes on the heels of a dismal four-game slide. “You had to slug it out.”

“(Vasilevskiy) makes it tough,” Campbell added of the former Vezina Trophy winner. “He sets the bar. It was just fun to battle.

“I believe in the boys and they came through.”

“The frustrating part is I didn’t feel like the Leafs beat us,” head coach Jon Cooper said. “I feel like we just beat ourselves.”

The teams last played March 10, 2020 — a 2-1 Toronto victory at Scotiabank Arena over its Atlantic Division rival — before the COVID-19 pandemic shuttered much of the sports world two days later.

Tampa, however, played 15 games inside the Toronto bubble as part of the league’s summer restart, including a quintuple overtime victory against the Columbus Blue Jackets in Game 1 of the teams’ first-round playoff series.

The Lightning went onto win the Cup in Edmonton against the Dallas Stars before repeating in July against the Montreal Canadiens.

After hitting two posts before Thursday’s game was four minutes old, Tampa jumped in front at 13:16 of the first.

The Leafs tried to work a set play following an offensive zone faceoff, but the visitors raced the other way on an odd-man rush, with Corey Perry feathering a pass to Maroon for the big winger to bury his first shortside on Campbell.

Toronto didn’t have much energy until late in the period when Hedman hooked Marner before blue-line partner Mikhail Sergachev immediately followed with an illegal check to the head on the Leafs forward.

Tavares was the first Toronto player to go after Sergachev in the ensuing scrum.

“Didn’t like it at all,” he said of the hit. “Mitchy was pretty exposed, no chance to really protect himself or see it coming.

“Hit him right in the head.”

Asked if the play should result in a suspension, the Leafs captain said he hopes the league takes a look at the play.

“We want that stuff out of our game,” he said.

“I haven’t really seen it, to be honest,” he said. “I know he came across, caught me up high a little bit.

The ensuing two-man advantage could have been a moment to lift a crowd looking for something to get excited about heading into the intermission, but was lost thanks to a disjointed sequence that saw Toronto fail to really threaten Vasilevskiy.

“Not enough pace, puck movement,” Marner said. “We were just kind of out of it that whole first period.”

Campbell made a nice stop on Brayden Point early in the second before Vasilevskiy denied Matthews and Wayne Simmonds on good chances in tight.

Simmonds had another great opportunity with under a minute to go in the period when he was sprung on the breakaway, but the Tampa netminder denied his move to the backhand.

“They are both tremendous,” Nylander said of the crease duel. “They were on their heads today.”

Vasilevskiy flashed his leather on Toronto defenceman Rasmus Sandin seven minutes into the third before Nylander also tested him glove side.

Campbell kept his team in it with a great stop on a Point break later in the period, and Travis Dermott blocked Mathieu Joseph on the rebound before Tavares tied it late.

“That’s a miserable third period,” Keefe said. “They’re locking it down, they’re defending hard. I think there’s a lot of things we can take away from the back-to-back championship tonight in that sense.

“But also that our guys remained committed to it right to the very end.”

This report by The Canadian Press was first published Nov. 4, 2021.