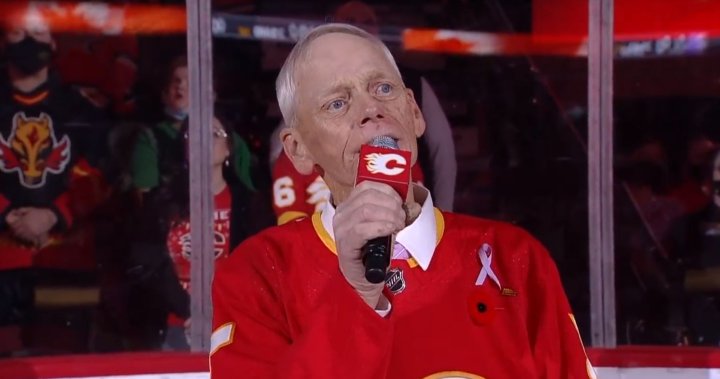 It was the chance of a lifetime for Dan Joyce: singing the Canadian national anthem for his beloved Calgary Flames and the ‘C of Red.’

But to understand just how important this moment is you have to go back — wayyyyy back.

“This would never have happened if it wasn’t for the prank,” Joyce said.

You see, this New Brunswick mechanic has been singing his entire life. While he certainly never thought he’d go pro, he wasn’t afraid of a crowd.

“He’d come home and sing the wrong words to whatever country song he was listening to that day and from there it just kind of grew into him doing some of the anthems for my hockey games growing up.

“It almost became a tradition for him to have a chance to sing in my games.”

Then came the prank.

In the early 1990s, a Saint John station tricked Joyce into performing the national anthem on the radio under the guise of auditioning to become the singer for Calgary’s AHL affiliate, the Saint John Flames.

“The next week, the Flames did actually call me and asked me to sing for the AHL team,” Joyce laughed. “Over 5,000 fans turned out that game and I sang it — and then I sang it many times after that.”

That’s a bit of an understatement.

Over the decades, he’s performed at weddings, funerals, and thousands of hockey games at all levels. But things took a turn in February, when a tumor was discovered in his esophagus.

He got to perform the national anthem virtually for the Calgary Flames in April, as part of the annual Hockey Fights Cancer game.

“The Calgary Flames are my favourite sports team — the oncology department is my favourite team, period,” Joyce said.

“They saved my life.”

Since his recovery has come so far in the months since — he’s even back to working half-days at the garage — the Flames opted to fly Joyce and his family to Calgary to fulfill that decades-old dream in person.

Joyce and Dan Jr., his wife Sharon, and daughter Christina, are getting the royal treatment and touring some southern Alberta landmarks in the whirlwind vacation as another son, Brad, and the rest of the family watched Dan’s big moment Thursday night from the Maritimes.

He faced the pressure the same way he faced surgeries and all adversity: with a smile and a song.

The cheers of the crowd started long before the song is over, and as the final notes of O Canada dissipated in the air, the ‘C of Red’ was on its feet — leaving Dan positively beaming.

The Flames’ lavender jerseys will now be auctioned off in support of Hockey Fights Cancer initiatives, with bidding closing Wednesday, Nov. 10 at 10:00 p.m. MT.

Joyce is currently awaiting test results that will tell him if he is in remission or if he has more cancer treatments ahead.