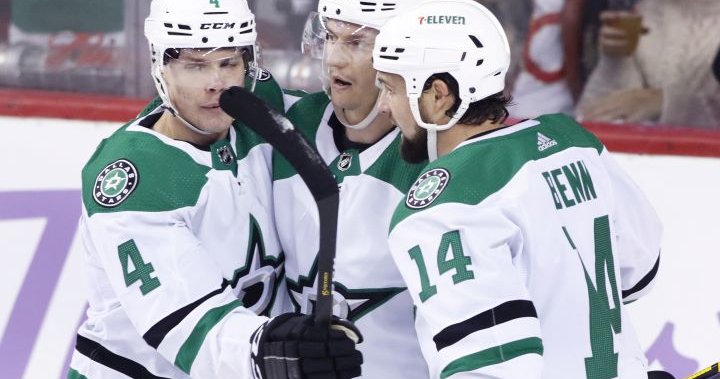 Jamie Benn scored the overtime winner and Miro Heiskanen chipped in with three assists Thursday for the Dallas Stars in a 4-3 win over the Calgary Flames.

Benn collected a drop pass from Joe Pavelski and sent a shot just inside the goal post on Jacob Markstrom at 2:59 of extra time.

Dallas has earned three of four possible points on their road trip, which concludes Sunday in Vancouver against the Canucks.

Consecutive overtime losses left the Flames 1-0-2 in a five-game homestand that continues Saturday against the New York Rangers.

Down 3-2 in the third, the unlikeliest of scorers tied the game for the Flames at 16:03.

Zadorov got the puck at the blueline during a four-on-four and fired a shot through a screen that beat Khudobin. It was the defenceman’s first goal in 37 games dating back to Feb. 28 of last season.

The goal came 15 seconds after the Flames had their power play cut short by Markstrom, who was penalized for playing the puck in the trapezoid.

Tied 2-2 after 40 minutes, Dallas took its second lead of the game 1:34 into the third when Seguin’s deflection of Alexander Radulov’s shot from the point went off his stick and then his midsection before tumbling into the net behind Markstrom.

The Stars opened the scoring on the power play at 14:09 of the first period on a terrific play by defenceman Miro Heiskanen.

He skated in from the blueline to zip a hard pass diagonally through the slot that was neatly steered into the net by Gurianov.

Heiskanen leads the Stars in scoring with 10 points (two goals, eight assists). He’s one point back of a group of the top-scoring defencemen in the league — Kevin Shattenkirk, Roman Josi, and Adam Fox.

The Stars’ lead remained 1-0 until the second period when the Flames scored twice in a span of less than four minutes.

Lucic tied it at 15:13 deflecting a slapshot from Zadorov past Khudobin.

Shortly after that, the Flames had a two-man advantage when Comeau caught Johnny Gaudreau in the face with a stick-lift attempt.

Calgary cashed in on the 5-on-3 with Elias Lindholm setting up Tkachuk in front.

But Dallas pulled even with just six seconds remaining in the period.

After he stepped out of the penalty box, Comeau got the puck from Michael Raffl on a two-on-one and beat Markstrom from a sharp angle.

Veteran Brad Richardson made his season debut for the Flames, playing LW on a line with Sean Monahan and Trevor Lewis. Richardson took the spot of Brett Ritchie (lower body), who was placed on IR.

The Stars improve to 15-5-3 in their last 23 games against Calgary, which includes five straight wins.