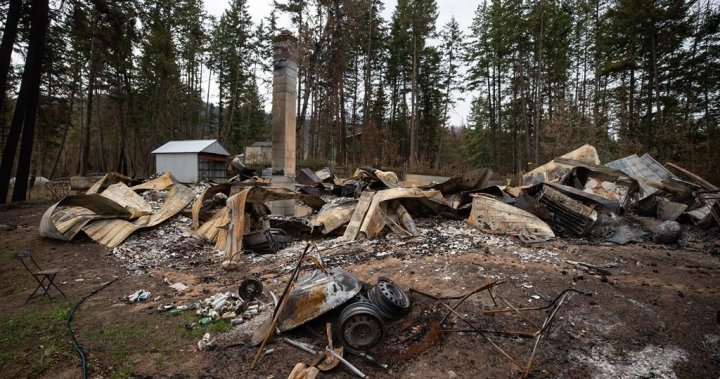 British Columbia’s 2021 wildfire season saw the destruction of the village of Lytton and homes levelled in several other Interior regions, but the BC Wildfire Service says it was not the worst season on record.

A 2021 wildfire summary says about $565 million was spent in the “tremendously challenging” period between April 1 and Sept. 30, when 1,610 wildfires charred 8,682 square kilometres, mainly in southern and southeastern B.C.

The service report says at the height of the fires, the daily number of active blazes was over 300, triggering 181 evacuation orders and 304 evacuation alerts.

A provincial state of emergency was declared on July 21 and wasn’t lifted until Sept. 14.

Total firefighting costs for the year could grow because the season doesn’t officially end until next March, but the report says the figure won’t surpass the $649 million spent in 2017, B.C.’s worst fire season, when 12,000 square kilometres of land burned.

The wildfire service report says drought-like conditions over southern B.C., coupled with record-breaking extreme heat and severe lightning storms, helped spark as many as 40 new fires every day in July.

“The dryness and extreme heat raised the fire danger to extreme levels, and burning conditions were more typical of what is normally seen in August,” the report says of the wildfire risk as it soared in late June.

The service imposed an early ban on all campfires and open burning on June 28 as B.C. sweltered under an unprecedented heat dome and temperatures reached an all-time Canadian high of 49.6 C in the Fraser Canyon community of Lytton.

The village was destroyed by a fast-moving wildfire the next day, killing two people.

A cause of that fire remains undetermined.

The report says the causes of about five per cent of wildfires in 2021 are undetermined, an estimated 35 per cent were sparked by lightning or other natural events, while the remaining 60 per cent have been linked to human activity.

In all, the wildfire service says there were 67 wildfires of note across B.C., involving response efforts from nearly 4,000 people during the intense season, including crews from Mexico, Australia and across Canada.