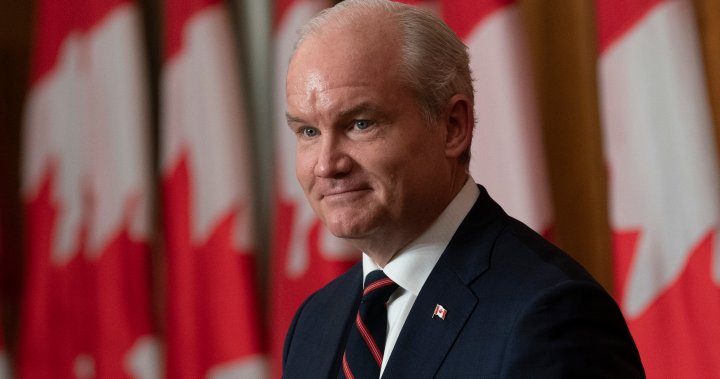 Wary Conservative MPs are in a “wait and see” mode as Erin O’Toole plans his next moves to maintain his hold over the party, multiple party sources tell Global News.

Speculation about O’Toole’s ability to hang on to his job has largely fallen silent, as the party conducts its review into how the Conservatives lost a third straight general election.

But MPs who spoke to Global News said caucus is closely watching for two major things in the coming weeks: what O’Toole’s shadow cabinet and leadership team might look like, and whether the Conservative leader changes course on significant policy issues without caucus input.

The former is a chance for O’Toole and his team to signal that they want to give different voices — including more critical voices within the Conservative caucus — a seat at the table in driving the party’s agenda.

The latter is a hangover from the lead up to September’s general election, when caucus learned about major policy decisions — like O’Toole’s 180-degree turn to embracing carbon pricing — from reading the news.

“Erin and his team have made a number of policy decisions and changes without consulting caucus,” said one MP, who agreed to discuss internal party issues on the condition the MP not be named.

“Which I think is why a number of people are so unhappy, right? And I think the approach (now) is, let’s see if he’s learned to not do that anymore.”

One major policy direction that hasn’t dramatically changed since the election is the Conservative position on mandatory vaccinations.

O’Toole maintained on the campaign trail that while Conservatives encourage everyone to get vaccinated, daily rapid tests would be sufficient for the unvaccinated. Insiders admit the position hurt them, particularly as concerns about COVID-19’s fourth wave rose toward the end of the campaign.

“The Conservative caucus is united. I put forward a plan and we support that plan, which is returning to a normal Parliament and making sure that MPs and senators that come to debate the issues of the day in Parliament are vaccinated,” O’Toole told reporters in Ottawa last week.

Rather than put the issue behind them, the policy sparked a new round of criticism in the media and left some MPs frustrated. One MP told Global News that O’Toole personally pushed for the position during last week’s caucus meeting, fighting to bring MPs on board.

“He reinforced that position again and again and again. And it was convoluted. People didn’t understand it. People were asking for clarity,” said the MP, who agreed to talk to Global News about the closed-door meeting on the condition the MP not be named.

“It was exactly what he wanted and it took four hours to get caucus to that position. … It’s not on us. It’s not on anyone other than himself.”

“There was a lot of discussion, put it that way,” said another MP, who supports O’Toole, about the meeting.

“It just seems the guys that have decided to push the envelope seem to be on the ‘get rid of Erin’ team, as well. So it’s an awkward situation.”

How large that “get rid of Erin” team is, at this point, is unclear. But one MP in that camp told Global News that the anti-O’Toole contingent likely won’t move on the leader until they’re sure they have a critical mass of caucus support.

2:01
O’Toole claims he has support to remain Conservative leader as caucus meets

O’Toole claims he has support to remain Conservative leader as caucus meets – Oct 5, 2021

“Shuffling Chairs on the Deck”

O’Toole has shown few signs that he’ll change direction or strategy after September’s disappointing election results — including making few changes among the senior people advising him.

Global News has learned O’Toole has promoted Laura Kurkimaki, who served as the party’s deputy national campaign director, to the role of principle secretary — a key position in the Office of the Leader of the Opposition (OLO).

Jake Enwright, a longtime party hand who served as director of communications to former leader Andrew Scheer before working with Chinese telecom Huawei, will serve as one of O’Toole’s deputy chiefs of staff. Enwright worked in the party’s war rooms in both the 2019 and 2021 elections.

Josie Sabatino, another longtime Conservative staffer, will serve as director of communications while Chelsea Tucker, who previously held that role, takes on a new role with the party’s strategic communications.

After the 2019 election loss, Scheer eventually accepted resignations from senior staff in his bid to hold onto the leadership — a move O’Toole has so far avoided making.

“I don’t think any of that is positive,” said one MP, when informed of the staffing moves. “When you go through a campaign and you lose two seats, changes should be made. You shouldn’t just be shuffling chairs on a deck.”

O’Toole’s office did not respond to multiple requests for comment from Global News.

Earlier this week, the Canadian Press reported that the National Citizens Coalition — a right-wing lobby group once led by Stephen Harper — is pushing the party to return to traditional conservative principles after a campaign seen by most “true blue” party members as centrist.

The report suggested O’Toole is also being squeezed by gun advocates, who supported O’Toole in the 2020 leadership campaign, over the campaign’s flip flop on their pledge to undo the Liberals’ ban on “assault-style” rifles.

But the party’s grassroots — and the third-party groups that purport to represent them — will have to wait until the 2023 convention to formally express their displeasure with O’Toole’s leadership.

“I don’t think Erin and his team have a good sense of caucus. When things are at a boiling point, they think things are fine,” the MP said.

“I think that’s the danger for him and his team. They do not have a good sense of where caucus is on things. And I think that could lead them to make a very big mistake.”

— with files from the Canadian Press.