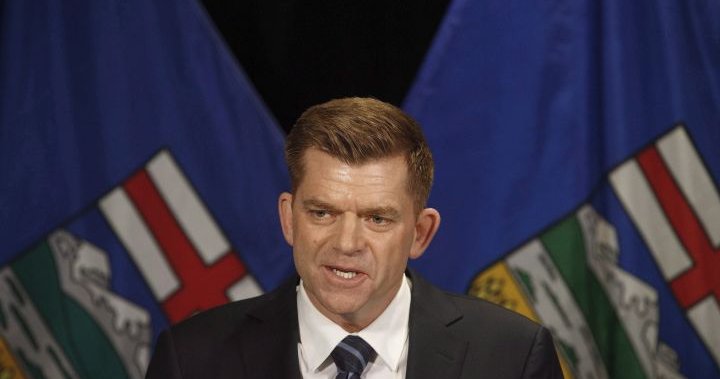 The former leader of Alberta’s Wildrose Party, who lost the 2017 UCP leadership race to Jason Kenney, announced on social media Wednesday night that he is pursuing the UCP nomination for the yet-to-be scheduled byelection in Fort McMurray/Lac La Biche.

“I will need your help,” Brian Jean said in a post on Facebook. “The NDP won’t want me to be in the legislature. Some in the UCP will want to stop me as well.

“If you live in Fort McMurray or Lac La Biche or the communities in between, I will need your help.”

Global News reached out to Jean for an interview, but he declined to speak on Wednesday night.

Jean suggested if something does not change, “Rachel Notley will win the next election with an overwhelming majority.”

“That will be bad for Alberta,” he said.

Watch below: Some Global News videos about Brian Jean.

The Fort McMurray seat was left vacant when Laila Goodridge decided to run for the Conservative Party of Canada in this summer’s federal election.

Jean said he has filed papers with Elections Alberta to pursue the nomination.

Kenney will face a leadership review in the spring. The review was announced in September as Alberta battled a fourth wave of the pandemic, which led Kenney to belatedly introduced new measures to curb the spread of the virus.

Watch below: Some Global News videos about Premier Jason Kenney and criticism he has faced from some UCP members.

0:56
Kenney still believes he has support of his caucus despite comments from MLAs

Leading up to the announcement, a number of constituency associations had been calling for an early party review and vote on Kenney’s leadership, according to Joel Mullan, the UCP’s vice-president of policy.

Jean has been openly critical of Kenney’s leadership. In a column published by Postmedia earlier this year, he said the premier’s “fight everyone” approach is not getting the job done for Albertans on critical issues, including energy and federal relations.

The 2017 leadership race that saw Jean lose to Kenney continues to be investigated by the RCMP after allegations of wrongdoing were raised.

Alberta’s Election Commissioner has levied multiple fines against multiple people in connection with the race.

Jeff Callaway, another leadership candidate, has been dogged by allegations his was a kamikaze campaign with the sole purpose of targeting Brian Jean, Kenney’s main opponent in the race.

Callaway ultimately dropped out of the race and threw his support behind Kenney, who later became leader and then premier.

Throughout the 2019 Alberta general election campaign, Kenney denied involvement in the scheme.

“There was staff communicating on communications material and stuff like that,” Kenney told Global News Radio in March 2019 while speaking about his campaign staff’s dealings with members of Callaway’s leadership campaign. “This is not the least bit unusual that campaigns will communicate.”

Kenney has also vehemently denied that he helped to finance Callaway’s campaign in any way.

Jean is a ‘major contender’

“I think Brian Jean is going to be coming at this representing the former Wildrose fragments of the UCP. Definitely, if he puts his name forward when the position comes open after a review, he’s going to be a major contender for the leadership of the UCP,” he said Wednesday night.

“I think the realization is that Jason Kenney is not going to be able to take the party forward into the next election… I think Mr. Jean is preparing the ground for when that position comes up because it’s obvious to every observer that the UCP will definitely be looking for a leader after that review takes place next spring.”

Jean has hovered over the issue of party leadership, Mensah noted.

“It would be best for internal party unity to allow the process to proceed, allow Mr. Jean to run because this is a big tent party now.”

“What the party needs badly is a united caucus, and any attempt to interfere in this nomination process will really compound the problems that are part of the party, fracture it even more,” he said.