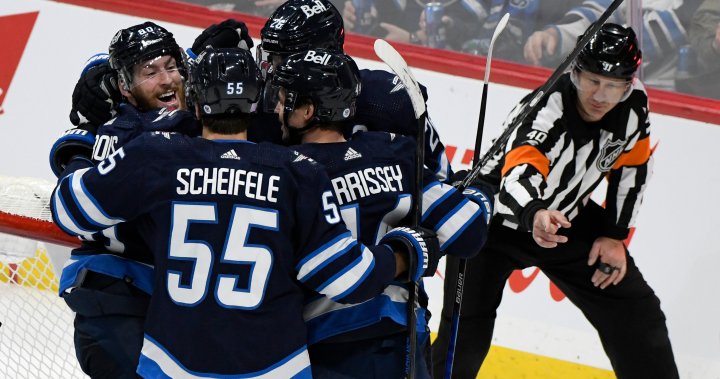 After missing the Winnipeg Jets’ first two games on home ice, Mark Scheifele made his return to the lineup one to remember.

Back in the lineup after missing more than a week of action due to a positive COVID-19 test, Scheifele scored the shootout winner as the Jets got past the Dallas Stars 4-3 to improve to 3-0 on home ice this season.

“I guess COVID only makes you stronger,” Scheifele joked. “It was awesome to be back with the boys. It was awesome. I had a blast. It was huge to get the win and so fun to be back. It was my first game in front of the Jets fans again, so it felt even better.”

The Jets surrendered a two-goal third period lead, but dominated the 3-on-3 overtime period, and eventually prevailed in the shootout to give them at least a point in seven consecutive games.

“I especially liked how we got going a little bit in the second period, I did.” said head coach Paul Maurice. “I just didn’t like that we got comfortable in a game. We just took away our strength. We took it away. And it wasn’t from turnovers. It was just, we were moving the puck around more than it needed to be. We were overpassing.”

After a slow start to the season, the Jets power play continued to produce. They scored two more goals with the man advantage in four opportunities against the Stars with Pierre-Luc Dubois and Josh Morrissey recording power play markers.

“You look at the guys that I’m out there with on the power play,” said Morrissey. “Some pretty talented players and (Nate) Schmidty has been just lights out making that pass over to me. When you have that many weapons on the ice, someone’s going to make a great play.”

With his third tally of the season, Morrissey is now tied for the league lead in goals among all NHL defencemen.

Schmidt had a pair of assists in the win, while Dubois continued his torrid pace. With his seventh goal of the season, Dubois is now riding an eight-game point streak where he’s racked up seven goals and four assists.

It was the Jets first game against the division rival Stars since December 2019.

The Jets were playing without number one goalie Connor Hellebuyck after his wife gave birth to a baby boy early in the morning.  Eric Comrie made his second start in the last three games and was sharp in making 24 saves in the win, his second of the season.

“He’s been fantastic,” said Scheifele. “He’s made some great saves. He’s been solid. He was great in the shootout and he’s been awesome. He’s that guy that everyone wants to do well. He’s probably the best human other than my dad. Sorry dad.”

Paul Stastny opened the scoring midway through the first by simply getting in the way. With Stastny parked in front of Braden Holtby, Nathan Beaulieu’s point shot deflected off Stastny and trickled through Holtby.

The Stars weren’t able to muster much of a response until Jamie Benn found himself in front of the Jets net without a defender in sight with just under four minutes left in the period. Benn out-waited Comrie and tucked in the equalizer.

The second period began with the Jets on the power play and immediately they made the Stars pay. Morrissey blasted his third of the season past Holtby to give Winnipeg the lead.

It appeared that Roope Hintz had evened the score on a breakaway a few minutes later. But the Jets challenged and video replay showed that the Stars forward was just a touch offside, so the goal was disallowed.

The Jets power play continued to click later in the period when Dubois drove the net and was credited with his seventh of the season. One could argue that Dubois kicked the puck past Holtby, but the officials ruled it was a good goal to give Winnipeg a 3-1 lead.

It was a period that the Jets were in complete control of until the final couple of minutes, when Comrie made a number of solid saves to maintain the two-goal advantage heading into the third.

But it was Dallas who would strike first in the final frame. After Neal Pionk took a holding penalty, Jason Robertson banged home a rebound to make it a one-goal game with just over ten minutes remaining.

The visitors would keep up the pressure and less than four minutes later, John Klingberg made a great play to create a shooting lane and wired a wrist shot past a screened Comrie to tie the game. Tyler Seguin would later get credit for the goal.

Neither team was able to find a winner in the third, so off to overtime they went.

Morrissey had a great chance just over two minutes into the extra frame, weaving through the Stars defence but his shot hit the post and stayed out of the net.

Dubois also had a glorious chance on a partial breakaway but he was denied by Holtby, right before Hintz had a yawning cage for Dallas but the puck rolled on him and he fanned on the shot.

Still searching for a winner, the game went to a shootout, the first for the Jets this season.

After Comrie denied the first Stars shooter, Kyle Connor made a wicked move to beat Holtby, but Joe Pavelski answered for the Stars.

The next shooter for each squad missed, leaving the game on the stick of Scheifele, who made no mistake in securing two points for Winnipeg.

READ MORE: Winnipeg Jets’ Cheveldayoff says he was ‘not aware’ of severity of Blackhawks scandal allegations

The Jets will be back in action Friday night at home against the Chicago Blackhawks, the first leg of a back-to-back with the Islanders visiting Saturday.