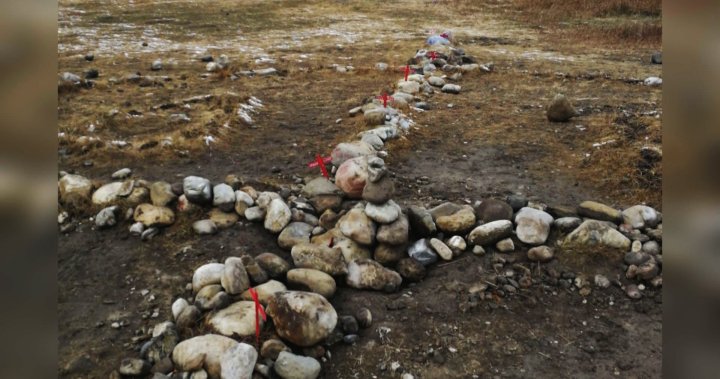 Calgary police are investigating after a Blackfoot stone marker in Nose Hill Park was vandalized over the weekend.

The incident took place at one of the park’s peaks at what Blackfoot elders describe as a marker. It has also been described as a medicine wheel.

Giovanna Longhi told Global News on Monday she and her husband were walking their dog near the site Friday afternoon when they noticed two women inside the circle who appeared to be praying.

Longhi said she and her husband also noticed some of the rocks had been moved, and there were some red crosses placed in between the rocks. She said they approached the women, asked them what they were doing there and explained the site’s significance to Blackfoot people.

Longhi said it did not appear as if the women believed what they were hearing, and eventually, she and her husband went down the hill to a police station to report what they saw.

“To deface it, to vandalize it just seemed wrong. It was an opportunity to shed light on this site, which is for all Calgarians,” Longhi said.

The stone marker was first installed in a ceremony in 2015 as an effort to signify the Blackfoot traditional territories.

According to Williams, these markers can be seen throughout Blackfoot traditional territories from the North Saskatchewan River to Wyoming.

During the 2015 ceremony, Williams explained, there were many prayers by the elders to ensure this would be a spot honouring and welcoming everyone.

“They prayed to bless Nose Hill, and they prayed for all humanity, including the residents of Calgary, that we have a good future and enjoy life to the fullest,” Williams said.

A key part of the messaging that day was to build an opportunity for understanding between all people today and in the future.

When asked how he felt about the incident, Williams said: “It was sad to hear that some person or individuals conducted this very harmful, wrong act. It shows that they need prayers. They need understanding.”

“The ceremony that was conducted at that site was totally ignored,” he said.

Williams also expressed disappointment that throughout history, these kinds of actions have been committed against Indigenous Peoples and the places that are sacred to them.

Read more:
MMIWG ribbons tied to trees again in Calgary after being thrown in trash

That disappointment is something Roy M. Weasel Fat, the president of Red Crow College, echoed.

“I can’t understand the thinking behind people vandalizing these sites.”

Weasel Fat said several other Indigenous sites in Alberta have been destroyed by industry or new developments.

“That is what we need to protect because Indigenous history has largely been ignored.”

Longhi said she believes this is an opportunity for education and awareness.

“They are not just a random pile of rocks put in a shape. There’s a lot of thought and culture and history behind it and so it is about respecting that,” she said.

Read more:
‘We encourage people to do the research’: A look at developing land acknowledgments in Canada

Williams said he would prefer the site to remain in its natural state moving forward, rather than seeing a sign put up to identify the marker.

He and Weasel Fat believe with more opportunities for education across generations and cultures, people can come to recognize these markers for what they are.

He said they could probably place the stones again the way they were and go through another ceremony, “but we are hoping that these individuals that are not co-operating will start learning to use the values that are given to humans to become humans.”