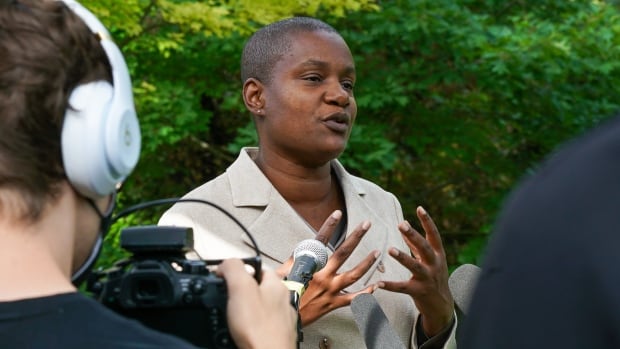 Green Party Leader Annamie Paul told a party meeting recently she was blindsided by the decision to put her leadership to a membership vote without informing her first.

Paul said she only learned about the leadership review when the party sent a message out to the membership, catching her “by surprise.”

Paul made the remarks at a federal council meeting on Wednesday, according to a source who attended.

CBC News has verified the content of Paul’s comments. Federal council is the governing body of the party and its meetings are often well attended by Green Party members.

Paul suggested there is no need for a leadership review because she has announced her resignation already. She said she’s hoping negotiations between her lawyer and the party over the terms of her departure end soon, but she didn’t offer a timeline.

The comments are among the first Paul has made since announcing on Sept. 27 she would be stepping down as leader of the Green Party of Canada. Paul hasn’t done any interviews since holding her one and only post-election news conference, during which she took no questions.

Paul also told the meeting news of the leadership review “confused” her and other party members. Under the party’s constitution, leadership reviews are required after any federal election that doesn’t end with the leader becoming prime minister.

But the review seems to be a moot effort in Paul’s case, since she has announced already she’ll quit once exit negotiations are completed.

People in the party were expecting those negotiations to wrap up by now. Paul didn’t say what the sticking points were when she addressed Wednesday’s meeting.

CBC News has reported that lawyers involved in the talks can’t agree on how far the party should compensate Paul for the legal fees she incurred fighting the party’s last attempt to end her leadership, just before the federal election.

In July, some on the Greens’ federal council attempted to trigger an early leadership review after one of the party’s MPs, Jenica Atwin, crossed the floor to the Liberals. Paul took the party’s top brass to arbitration to block that attempt.

The arbitrator ruled in Paul’s favour, telling federal party council members they could not proceed. Claiming the arbitrator erred, the party executive filed a notice of application for leave to appeal in the Ontario Superior Court.

The negotiations between Paul’s lawyer and the party remain confidential, and it’s not clear whether the sum of money she receives will ever be disclosed to Green Party members. The party is struggling with fundraising and was forced to lay off staff last month.

“Members must vote to remove her as leader in the leadership review,” said Harris in an email addressed to former election candidates, a copy of which was obtained by CBC. “We can then get on to rebuilding the party. Our future on this planet demands it.

“Annamie Paul’s tenure as leader has been disastrous. She should have resigned immediately after the election.”

In an interview with CBC, Harris said the Greens need a leader who is engaged. He pointed to the fact that the party wasn’t represented by its leader at the COP26 climate conference in Glasgow this week.

“Annamie Paul said to the world more than four weeks ago that she can no longer do this job, and I want to honour her wish,” he said.

Harris’s successor, Elizabeth May, is in Glasgow for COP26. She said she would not comment on her party’s internal politics — except to suggest that Paul shouldn’t stick around.

“I personally believe that we should have accepted Annamie Paul’s resignation, but she has apparently said she hasn’t really resigned,” May said. “I can’t comment. I am not involved in decision-making within the party.”