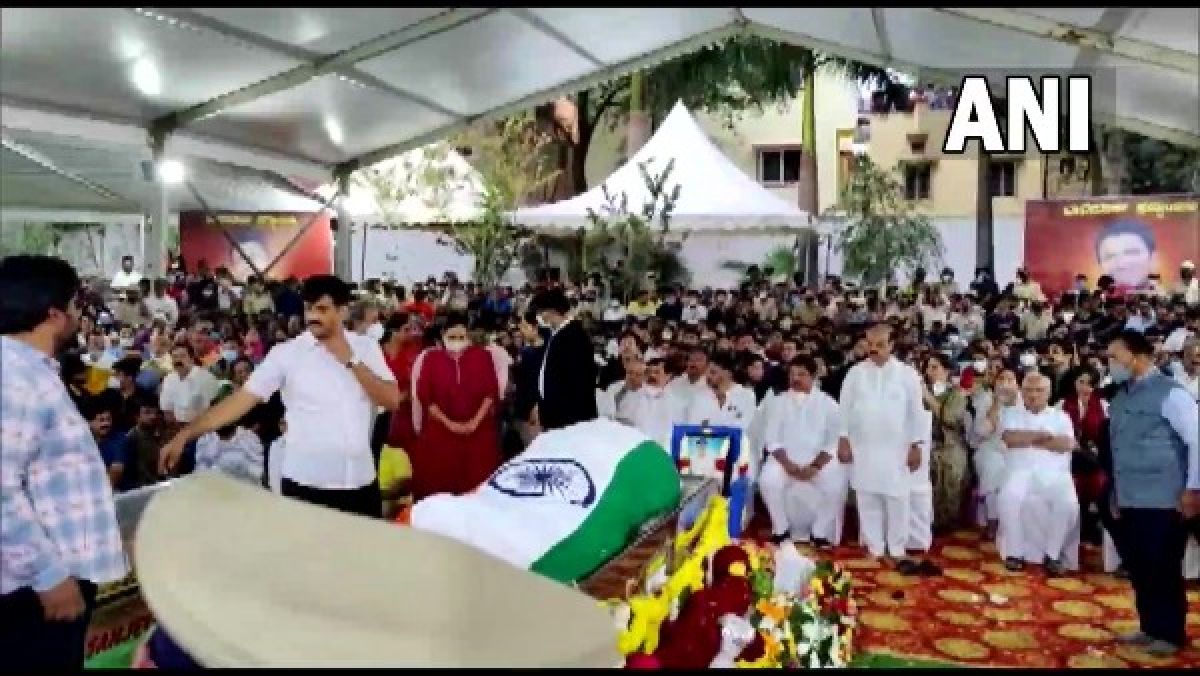 State honour were given to Kannada actor Puneeth Rajkumar at Sree Kanteerava Studios in Bengaluru, in the presence of CM Basavaraj Bommai and others.

#WATCH | Mortal remains of Kannada actor Puneeth Rajkumar being carried to Sree Kanteerava Studios in Bengaluru, where his last rites will be performed today pic.twitter.com/xHyBYL6Rxt

His mortal remains, wrapped in the national flag, have been kept at the Sree Kanteerava Stadium in Bengaluru, to enable fans and well-wishers to pay tributes. As thousands of grieving fans continue to flock the Kanteerava stadium to pay their final respects to Kannada film star Puneeth Rajkumar, Karnataka Chief Minister Basavaraj Bommai said the last rites of the actor will be performed on October 31.

The late actor’s family and the government had earlier planned to perform the last rites this evening, once his daughter, who is in the US, reaches the city.

“Puneeth’s daughter has reached Delhi and is travelling to Bengaluru and may reach the city by about 6 pm. Secondly, there is lot of crowd here (Kanteerava Stadium) and many people wish to see him for one last time, also after 6pm when it will be dark it will be difficult to perform last rites there (Kanteerava studio),” Bommai said.

Speaking to reporters here, he said keeping all this in mind and after discussing with Puneeth’s elder brothers Shivarajkumar, Raghavendra Rajkumar and other family members, it has been decided to conduct the last rites tomorrow.

Considered as the Kannada cinema’s reigning star, Puneeth, youngest of the five children of thespian and matinee idol Dr Rajkumar, passed away at the age of 46, after suffering a cardiac arrest on Friday.

Requesting fans to cooperate with police as there is enough time, the CM said, “Police personnel are here for us and to see to it that things go on in a disciplined way, they too are our people and are fans (of Puneeth).” “Everyone should cooperate in maintaining peace and order… timing of the last rites will be decided late night, depending on the situation and will be informed,” he added.

Puneeth’s elder brother and actor Raghavendra Rajkumar too thanking fans for cooperation so far, clarified that last rites will be during the first half tomorrow. “As Appu’s (as Puneeth is fondly called by fans) elder daughter was in New York for studies, there is some delay in her arrival.

As the last rites cannot be performed after dark, we will decide on the timing of the last rites tomorrow, late in the night today, once she arrives. We are aware that you (fans) are also in pain,” he said.

The state government has made arrangements for all Puneeth’s fans to pay homage, he further said as he sought their cooperation until the last rites tomorrow. Mortal remains of the actor, wrapped in the national tri-colour, have been kept at the Kanteerava stadium, to enable fans and well-wishers to pay tributes.

A steady stream of people from across the state have been pouring into the arena since last evening. Several film and political personalities have paid their respects to the departed soul. Karnataka Governor Thaawarchand Gehlot accompanied by Chief Minister Basavaraj Bommai and other ministers of the state cabinet, Leader of Opposition Siddaramaiah, former CM S M Krishna, pontiffs of various mutts paid their respects today.

The government has announced that Puneeth’s last rites will be conducted with state honours at Dr Rajkumar Punyabhoomi in Kanteerava Studio, next to his father and mother.

The late actor is survived by wife Ashwini Revanth and daughters Drithi and Vanditha.

The CM’s repeated appeal for peace comes in the backdrop of the large-scale violence that took place in the city, following the death of Puneeth’s father Dr Rajkumar in 2006.