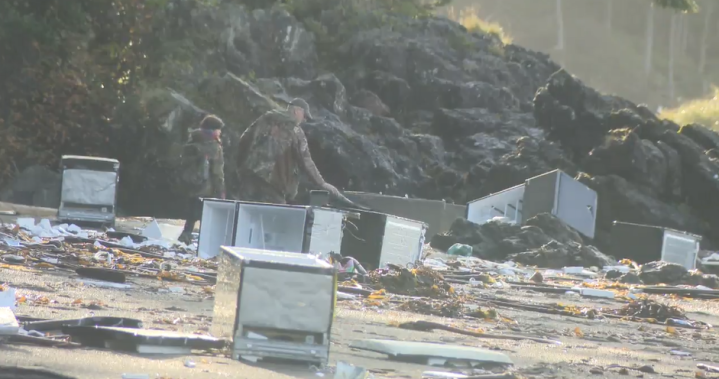 A hereditary chief with the Kwakiutl First Nation on Northern Vancouver Island is raising concerns about the long-term environmental impact from scores of cargo containers lost at sea in the area.

More than 100 containers broke free from the MV Zim Kinston near the mouth of the Strait of Juan de Fuca during rough seas last Thursday.

Four of those containers have since washed ashore, some of them strewing their contents across beaches near Cape Scott. But another 105, including two filled with toxic chemicals, remain unaccounted for.

“All of this pollution that just hit our shorelines, it won’t take long for it to break down into smaller pieces, especially the Styrofoam and the plastics,” Hereditary Chief David Mungo Knox said.

“That’s going to have the biggest impact in the future, talking about the wellness and the healthiness of clam beds and/or salmon,” he added, noting that the community was in the midst of the clam harvest season.

Knox said he was particularly worried about the two remaining hazardous materials containers and their potential environmental impact should they break open.

Danaos Shipping Co., which operates the Zim Kingston, has hired two companies to manage shoreline and waterside recovery, and the Canadian Coast Guard has urged people to keep away from the containers for safety reasons.

Robert Lewis-Manning, president of the Canadian Chamber of Shipping, said based on the number of lost containers and the size of the B.C. coast, the cleanup won’t be easy.

“That’s not going to be a quick process, it’s going to be complex. A lot of the containers that have washed up so far are in remote places, so that’s going to take a lot of planning,” he said.

“They’re big heavy pieces of steel that can be dangerous, especially if they’ve been damaged, so it’s important for people not to touch them,” he added.

No contractors or government agencies were observed on-site on Friday.

Knox said coast guard officials had stepped up following the accident, but that they need to move faster.

“I really got to say that thank you, coast guard, for being here because this is very important and they’re on top of this, we’re working together — it’s kind of slow … but still things are in motion,” he said.

“But I wish it would happen sooner than later because time is of the essence right now as our next storm is on Monday.”

North islanders, he said, had already begun moving debris above the high water line on some beaches in anticipation of an upcoming king tide.

Knox said once the urgent issue of the lost containers is addressed, he wants to see a focus on container ship safety, particularly in stormy weather.

“I mean, is there any mandate put forward talking about what’s in the containers? Or they should have a tracking device on that, especially the toxic substances should always be tagged with a G.P.S.,” he said.

“Why are they not secured in big storms, or are they really secure? Who overlooks the maintenance? There’s so many variables.”