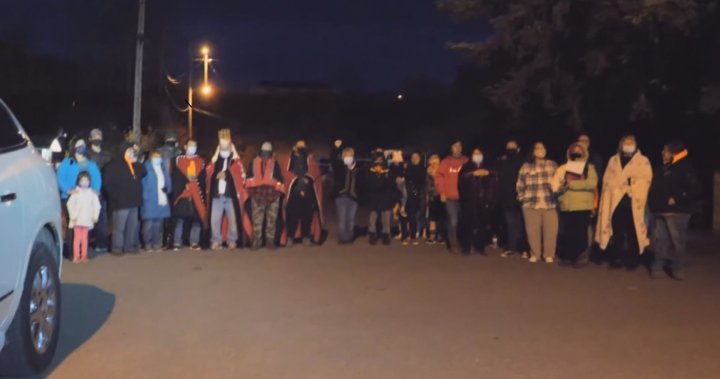 Indigenous leaders say the federal government’s possible appeal of a ruling ordering Ottawa to compensate children removed from their homes is a step backwards in reconciliation.

“I think talk is cheap, I think at the end of the day what we want is what every Canadian should be demanding and that’s that Canadian Human Rights Tribunal orders be respected,” Mary Teegee (Maaxw Gibuu), of the Takla Nation, and Chair of BC Indigenous Child and Family Services Directors told Global News.

The federal government announced Friday it would pause litigation for two months to try and negotiate a settlement by December. But that will just prolong the process of Ottawa delivering on its promises, said Gitanmaax Band Council Member Jessica Mikolayczyk.

Read more:
Compensation for Indigenous children does not equate to justice: AFN chief

“They make those commitments publicly to Canadian people but nothing happens on the ground and that is what we are experiencing in our communities and that’s why leaders are having to take matters into our own hands,” Mikolayczyk said, referring an incident Oct. 17 when members of her community stood together to stop a social worker from taking a six-year-old girl back to her foster home.

12:29
Teaching the truth: Why education needs to be informed and led by Indigenous people

Teaching the truth: Why education needs to be informed and led by Indigenous people

On Friday, a judge ruled the child would not be taken from the First Nation, determining it was in her best interests to remain near her family and cultural home, according to the Gitanmaax band.

That ruling came the same day Ottawa filed notice it plans to challenge a ruling ordering it to compensate an estimated 54,000 Indigenous children and their families $40,000 per child, amounting to about $2 billion.

“It was just nothing but sheer disappointment. The initial ruling was in 2006, it’s 15 years later and the government is still fighting those filings. It’s very disheartening and shows no level of commitment,” she said.

“Taking a child out of province and away from her biological parent is no different in regards to what happened in the residential school system.”

Ottawa’s decision to continue the now 15-year battle against a ruling to compensate children removed from their homes under discriminatory policies goes against verbal commitments the government made Teegee said, noting it comes during a national reckoning over the deaths of children in residential schools that operated up until 1996 and as the prime minister urges Canadians to stand with survivors.

“Reconciliation is never having to say sorry twice, and you think to about a couple weeks ago, when Trudeau was saying, ‘I’m sorry I went to Tofino instead of being at the first National Day for Truth and Reconciliation, he said sorry many times,” she said.

Talks are set to begin Monday between Indigenous leaders and the federal government and if a settlement isn’t reached, they’ll end up back in court, but Teegee says she’s remaining hopeful.

“When you have a system and a bureaucracy that is so embedded in a colonial mindset it’s going to take a lot to shift that, so I think there will be change but it’s not going to be because they want to, it’s because they’ll be forced to, and that’s why we keep going back to court.”

Until the federal government steps up to make good on its commitments, Indigenous leaders will continue stepping in to protect their children the best way they know how, Mikolayczyk said.

“We will continue protecting our children in our communities,” she said.

Teegee added that every Canadian has a role to play in ensuring there is justice for children and their families who’ve been discriminated against by government policies and are suffering due to the inadequate funding of the child welfare system.

“You have to think of Canada in the international market, this beacon of human rights,” she said.

“And at home we don’t even have basic human rights being respected by the government. The onus is really on Canadians to push back and say you need to do right by this country.”