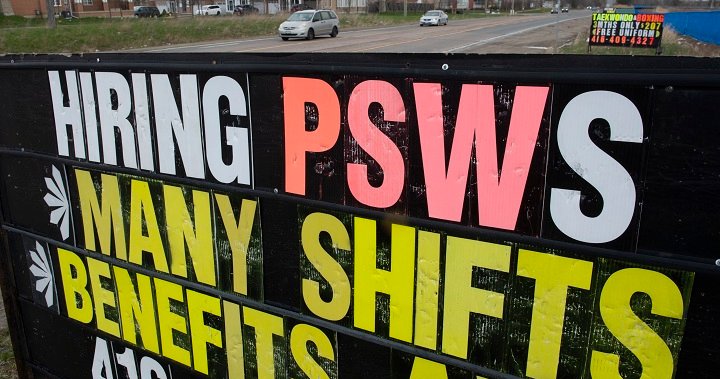 TORONTO — Donna Marcaccio had been taking care of her sister, Marcia for years.

But when Marcia’s condition deteriorated and she needed palliative care about a year ago, Marcaccio reached out for help from Ontario’s home care system.

After waiting for a month, she found herself facing a revolving door of personal support workers, many of whom either arrived hours late or had no idea what to do. Then the last-minute cancellations started.

“I stopped it, it was just so stressful,” Marcaccio said.

Nurses, personal support workers and therapists have left home care in droves during the COVID-19 pandemic.

“We lost literally over 3,000 nurses and skilled therapists and personal support workers to other parts of the health-care system,” said Sue VanderBent, the CEO of Home Care Ontario, which represents home-care providers in the province.

“And that is very bad news for Ontarians who are receiving home care because now our capacity is so depleted that people are just waiting at home for a home care nurse or therapist or PSW who isn’t coming.”

The organization achieved a 95-per-cent referral acceptance rate before the pandemic, meaning it could fulfil the vast majority of requests for home care. The current rate is 60 per cent.

“This is a crisis for home care,” VanderBent said.

About 900,000 Ontarians receive home care every year, she said, with 730,000 in the publicly-funded system. That means several hundred thousand people in Ontario are either receiving reduced home care services or no care at all, VanderBent said.

Dr. Samir Sinha, director of health policy research at the National Institute on Ageing, said the home care situation is dire. Wage parity can solve some of the problems, he said.

“What we’ve really seen right now is a huge cannibalization of our home care workforce, especially when it comes to nursing.”

COVID-19 has wreaked havoc on the home care system, he said.

Nurses left the industry early in the pandemic when assessment and testing centres popped up across the province. The drain continued when nurses were needed for mass vaccination clinics and later for contact tracing, he said.

And they were all paid a premium for those jobs.

“All of a sudden you have all these nursing jobs on the market to deal with the COVID response that pay far better than what a nurse working in a home care system was doing,” Sinha said.

Both Sinha and VanderBent agree the problem is expected to get worse due to the looming, massive surgery backlog created by the pandemic.

Patients can often leave the hospital sooner after surgery if they have home care lined up, they said.

“When you don’t have home care available, it means people end up waiting in hospital longer to be able to go home and it creates an entire system that becomes dysfunctional,” Sinha said. “It’s why we ended up having hallway medicine.”

Ontario’s former Liberal government had increased funding for home care so seniors could stay longer in their homes.

Sinha worked with the Liberals on the seniors’ strategy. He said the money, an increase of five per cent year over year from 2012 to 2018 when the Progressive Conservatives formed government, helped create 30,000 more “virtual long-term care beds” where people received care at home rather than in nursing homes.

He said it costs more than $700 a day to treat a patient in hospital versus $200 a day for someone in long-term care and $103 for home care.

Sinha pointed to Denmark, a country that invested heavily in home care in the late 1980s, as a model to emulate.

Of the money allotted to long-term care, Denmark spends 64 per cent on home and community-based care, Sinha said. The remainder goes to nursing homes.

The results have been impressive, Sinha said. The country was able to avoid building new nursing homes for nearly 20 years, closed several thousand nursing home beds because they weren’t needed and saved 12 per cent in overall long-term care expenditures on those 80 years and older.

There is growing demand for home care in Ontario.

In a recent survey of more than 1,000 people aged 55 and older commissioned by Home Care Ontario, 91 per cent said they’d prefer to remain at home if additional supports were available. Those numbers resemble previous polls by the National Institute on Aging where the vast majority of respondents 65 and older preferred home over long-term care.

“This is a rare opportunity when what the people want you to do is actually the cheapest thing for your government,” Sinha said. “Why wouldn’t the government do that? I’m left scratching my head.”

Health Minister spokeswoman Alexandra Hilkene said the department pays out more than $3 billion annually for home care and has invested more than $100 million this year to support home care for patients with “high, complex-care needs.”

She said the province is also working towards a home care “modernization strategy” that includes legislation that will allow for better “patient-centred” care.

Despite the extreme stress, Marcaccio said she’s glad her sister lived with her until she died in the spring.

“I knew that in her declining well-being, she had the peace of mind and emotional security of being in a familiar place surrounded by people she knew,” she said.

“But there needs to be a better way.”

Employees of SAQ refuse to sign the principle agreement