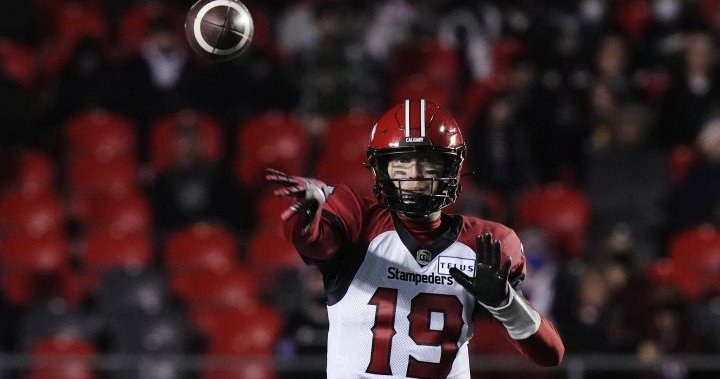 KaDeem Carey had a rushing touchdown, Kamar Jorden had a receiving touchdown and Rene Paredes kicked four field goals in leading the Calgary Stampeders to a 26-13 over the Ottawa Redblacks on Friday night.

Parades kicked a 47-yard field goal with just over two minutes to play for the only scoring of the fourth quarter.

The Stampeders (6-6) have won four of their last five games while the Redblacks (2-10) are on their second five-game losing streak of the season.

The Ottawa native was playing in his 100th CFL game but suffered an ankle injury making a tackle on the opening kick-off of the game. He did not return.

Bo Levi Mitchell completed 22-of-29 passes for 242 yards for the Stampeders while Carey had 103 yards rushing.

The first half was tightly contested as the Stampeders went into the break with a 13-10 lead, but the clearly had the momentum on their side.

Ottawa opened the scoring at 5:23 on a 15-yard field goal from Lewis Ward, but those points were tremendously aided by a 50-yard catch-and-run from Evans to Nate Behar.

Parades tied the game 3-3 with a 43-yard field goal at 10:03, and then a 11-yard touchdown reception by Kenny Stafford was 18 seconds left in the first quarter gave the Redblacks a 10-3 lead after the conversion.

That was the end of the first-half good news for Ottawa as it got just two first downs in the second quarter, one via penalty, and was outscored 10-0.

The Stampeders carried that momentum into the third quarter, forcing the Redblacks to a two-and-out on the first drive before moving the ball 44 yards and finishing up with a 28-yard field goal from Parades at 4:28.

Ward got those three points back though with a 24-yard field goal with just over four minutes to play in the quarter.

The Stampeders closed out the quarter with a 15-yard pass from Jake Maier, who replaced Mitchell at quarterback for that play and three other short yardage plays, to Jorden and the Stampeders took a 23-13 lead into the fourth.

It was Maier’s only pass of the game.