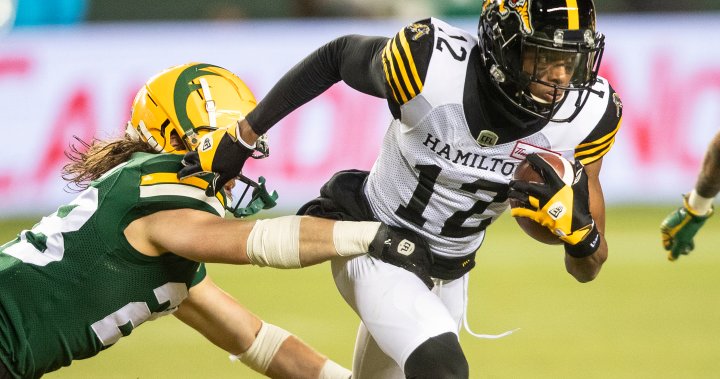 The playoff picture is coming into better focus for the Hamilton Tiger-Cats, while the Edmonton Elks’ playoff hopes are hanging by a thread.

Jeremiah Masoli passed for 357 yards and three touchdowns as the Tiger-Cats clawed back over the .500 mark on the season with a 39-23 victory over the Elks on Friday.

“Our receivers are so super-talented. They were just getting open and running away from guys,” Masoli said. “We’ve been building to get to here this whole season.

“It doesn’t matter where we start on that field, we will be able to flip the field. We are building that confidence for the home stretch.”

With the win, the Ticats (6-5) moved into a tie for second place in the CFL’s East Division with Toronto with 12 points.

“An understatement would be that I am proud of this team,” said Hamilton head coach Orlondo Steinauer. “We overcame a lot of adversity tonight. We came out here a little short-handed. Every game is hard to win, period, but with all the stuff and the injuries and whatnot, I am proud of this team. We did a good job in all three phases.”

It was the sixth straight loss overall for the Elks (2-8), who remained winless at home this season, the first time in the storied history of the franchise that they have had an 0-6 start at home. Edmonton’s playoff hopes are now hanging on by a thread.

“We got our butts whooped. They moved the ball at will and we didn’t play well enough consistently. Period,” said Elks defensive halfback Aaron Grymes. “It didn’t feel good, I know it didn’t look good. It also didn’t feel good being out there.”

After the Elks started the game with a punt single, Hamilton came back with a 12-yard touchdown pass from Masoli to Steven Dunbar Jr. six minutes into the opening quarter.

Hamilton continued to move the ball at will and added a 27-yard passing major with three minutes to play in the first as Tim White had a terrific second effort tracking down and catching a ball that had originally bounced off his hands.

The Elks responded with a 34-yard Sean Whyte field goal to open the second, before Tiger-Cats kicker Taylor Bertolet booted a 43-yarder of his own.

With two minutes left in the first half, Masoli unleashed a long bomb for a 65-yard TD to Jaelon Acklin.

A bit of a melee ensued late in the second quarter, resulting in the ejections of Hamilton’s Kameron Kelly for spitting at an opponent and Edmonton’s Jonathan Rose for coming off the bench.

Whyte opened the third with a 26-yarder, with Hamilton getting a pair of singles on missed kicks in the third before Bertolet was good on a 47-yarder to start the fourth.

Edmonton finally got into the end zone seven minutes into the final frame on a one-yard keeper by backup QB Dakota Prukop, who also added a two-point convert.

With just over two minutes left Hamilton’s Don Jackson weaved his way through the porous Elks defence for a 16-yard TD run.

Prukop pushed his way in for another one-yard touchdown in the final minute for Edmonton, which also got the two-point convert.

Both teams are back in action next Friday as the Tiger-Cats host the B.C. Lions, while the Elks are at home against Saskatchewan.

Notes: Although the Elks acquired quarterback Nick Arbuckle from the Toronto Argonauts this week, he was not yet ready to dress for the team ? Hamilton receiver Brandon Banks passed Darren Flutie for fifth-place in receptions in Ticats history.

‘For the greater good’: Indigenous financial advisor from Alberta works to empower others