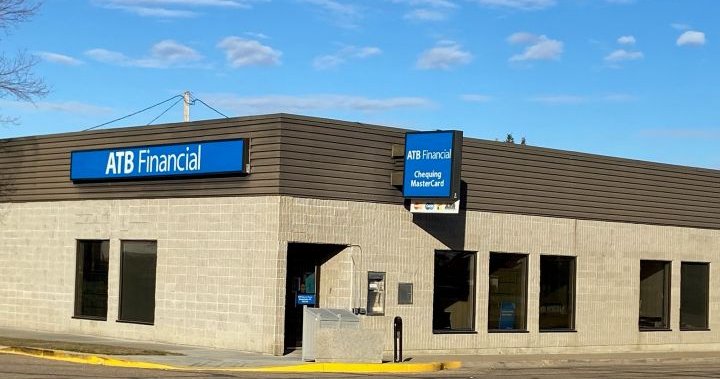 The town of Bruderheim, Alta., located about an hour northeast of Edmonton, has actively been pursuing new businesses through tax incentives and cheap land sales. But now, there are fears that losing its local bank could dampen investment.

In late September, Bruderheim’s residents learned ATB plans to close the town’s only bank in March.

“It’s just another kick in the guts for the town of Bruderheim,” said Dave Calder.

Calder said he’s been getting cash, paying his bills and maintaining a safety deposit box at the Bruderheim branch for decades. He is disappointed with ATB’s decision to close.

“I don’t think the bank is busy enough, or making them enough money,” he said.

ATB did not make anyone available for an interview, however, in a statement, the company said “the way our Bruderheim clients choose to complete their day-to-day banking transactions has been changing over time – more people are choosing convenient digital banking options.”

Calder said he has no interest in banking online.

“If you don’t care about me, I don’t want to bank with ATB anymore,” he said.

James Koladich said he has been banking with ATB his whole life, since his parents opened him an account as a child.

“When I turned 18, I got a credit card, then I got a mortgage through them, a small business through them. Everything’s been ATB the whole time.”

Now, he’s working next door to the Bruderheim branch and said he’ll miss the convenience.

“They say they’re going to set up an ATM — you can’t do much with an ATM is the problem. It’s nice talking to people.”

Koladich is also worried about the bigger picture.

“It’s really sad, especially for these small towns. On main street there’s not tons of buildings. You can see a lot of vacant ones. It’ll be sad to see another one.”

“A pillar of a community is a banking institution, in my mind,” he said.

“There are people who will not move to your community if they don’t have a bank to go to.”

Bruderheim has been bucking the trend when it comes to small towns, with its population increasing six per cent over the last decade.

There’s a new hotel made from shipping containers, a new firehall that also houses town council and a large hemp company in town.

“It feels like we’re getting some traction and moving our community forward. This comes along and it feel like a roadblock in front of us,” he explained.

There’s also fears about a ripple effect – that if residents need to leave town to bank, they might shop and spend their money on that same trip. That could spell disaster for local retailers.

“All the not-for-profits in our community, the town itself banks with ATB. Our family banks at the ATB, the senior men’s hockey team I help with banks at ATB.”

The next closest bank is 10 minutes down the highway in Lamont. The latest census data shows that town has around 450 more residents.

Hauch said he tried to convince ATB to change its mind and stay but the bank is steadfast in its decision.

“The municipalities around us, to the east of us in Lamont County, are not growing at the same pace,” he said. “I don’t understand why they would be doing that to us.”

So now he’s looking at other options.

“I’m hopeful that if ATB does pull out, that we might be able to find another banking institution to fill the void in Bruderheim, because I believe ATB is going to lose customers over this,” Hauch said.

READ MORE: Small town in Saskatchewan losing bank that’s been there over a century

The mayor hopes other towns pay attention to what’s happening in Bruderheim.

“I think this is a warning signal to all small communities in Alberta, that this is coming.”