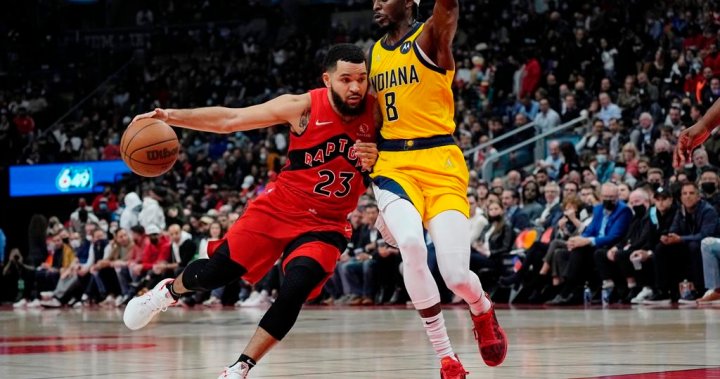 TORONTO – Raptors head coach Nick Nurse’s pre-game message to his players Wednesday was to “man up” and get that first home win of the season.

His team delivered with a well-rounded effort in a 118-100 win over the Indiana Pacers, a victory that was an effective blend of pace, performance and physicality.

Fred VanVleet had 26 points and a career-high 10 rebounds and OG Anunoby added 25 points as the Raptors won their first game in four tries at Scotiabank Arena.

“I thought it was a really good overall game in a lot of areas that we’ve been needing to improve or stressing working on,” Nurse said. “We guarded really well, we turned them over, played hard and got to the basket.”

Swingman Scottie Barnes chipped in with 18 points for the Raptors (2-3) and Toronto native Dalano Banton had 10 points in 16 minutes off the bench.

Malcolm Brogdon led Indiana (1-4) with 18 points and Chris Duarte had 14 points. Domantas Sabonis, who was averaging 24.8 points per game entering play, had a team-high eight rebounds for the Pacers but was held to just nine points.

VanVleet said Indiana shot a lot of jumpers early and he was able to scoop up some loose balls around the free-throw line area. His previous rebound high was a nine-board effort against the Washington Wizards on Dec. 20, 2019.

“My rule is if it gets below head level, it’s mine,” the six-footer said with a smile. “Anything up there by the rim, somebody else has to get that one.”

Barnes delivered a running one-handed slam dunk early in the fourth quarter to the delight of the sellout crowd of 19,800, giving Toronto a 98-78 lead.

“We were a step slow all night,” said Indiana head coach Rick Carlisle. “They were very aggressive, they were up and into us.”

Anunoby set the early offensive tone with 11 points over the first eight minutes. He had 16 points in the first quarter to help stake Toronto to a 29-24 lead.

Indiana opened the second quarter on a 9-2 run. Svi Mykhailiuk restored Toronto’s lead with a three-pointer that put the Raptors up 34-33.

Anunoby also flashed some defensive skills, crossing the court and fully extending to block a Brogdon shot from the wing. VanVleet made a three-pointer on Toronto’s next possession to give the Raptors a 57-48 advantage, a score that held into the halftime break.

“I thought we were definitely very physical tonight,” VanVleet said. “OG set the tone in the paint offensively. I thought all five guys were on the same page defensively to start the game.”

The Pacers had some early success when they penetrated down low, with Brogdon leading the way with 16 first-half points. But Indiana struggled from distance over the first two quarters, converting just two of 14 three-point attempts.

Barnes and Banton provided some offensive spark early in the second half. Anunoby ended a long scoring drought with a three-pointer late in the third quarter and VanVleet added a deep three just before the buzzer to give Toronto an 87-71 lead.

“They’ve got quick, angular guys,” Carlisle said. “They were ripping at the ball all night and they knocked a lot of balls loose. Give them credit, they executed well.”

Toronto will close out its four-game homestand Friday against the Orlando Magic. The Pacers will continue their road trip with a visit to Brooklyn that night.

Notes: The Raptors and Pacers will meet again Saturday at Gainbridge Fieldhouse. … Indiana’s last win in Toronto was on March 1, 2013. … Toronto native and former Raptor Oshae Brissett had six points for the Pacers. … Carlisle celebrated his 62nd birthday on Wednesday.

This report by The Canadian Press was first published Oct. 27, 2021.