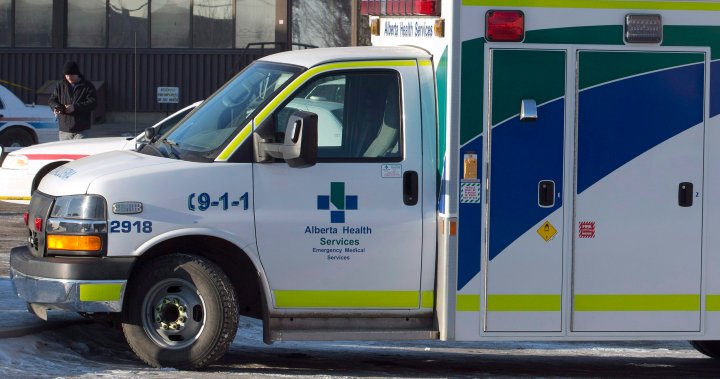 A union representing thousands of employees in Alberta’s health-care sector, including paramedics, says the state of ambulance services in the province is dire — but that’s not new information; it’s just falling on deaf ears.

Albertans can no longer be certain an ambulance will be available to respond when they need one, the Health Sciences Association of Alberta said in a news release Tuesday.

It took more than 30 minutes for help to arrive after Shelly McCreary called 911 for her 87-year-old mom Mavis Irwin’s nosebleed on Tuesday.

“We were in awe of how long it did take to get help,” she said.

McCreary said when paramedics arrived, they told her she was lucky crews were just coming off another Calgary call.

“If they hadn’t just finished that call, we would have had to wait for an ambulance to come out of High River,” she said.

“It makes me so angry that a province like Alberta is in this position now.”

HSAA president Mike Parker said Wednesday: “The pressure it’s putting on that patient and the paramedics responding is at the highest level. I have never seen it at this level before.”

When there are no ambulances available, it is called a code red or red alert.

“Year over year, it’s increased to the point where code red is an everyday operation,” Parker said.

“When you look at Calgary this weekend, the reports that we’re receiving are absolutely devastating: the hours on end that there were no trucks available, the fact that Kananaskis responds to the city of Calgary for a call.”

The HSAA started the HSAA EMS Facebook page on Aug. 28, sharing its own tracking information from paramedics to “give Albertans a better idea of the true state of ambulance service in the province.”

Since Aug. 28, it says there were at least 135 red alerts in at least 12 communities, including at least 61 in Calgary and 35 in Edmonton.

Alberta Health Services said code reds or red alerts do not mean EMS is unable to respond to emergencies to provide patient care.

“Code reds are used as a system management tool that lets EMS know when and where additional resources are required to ensure we are able to always respond to emergencies,” the health authority said Wednesday via email.

“Code reds most often last only a few seconds to a couple of minutes and end when resources become free or are deployed from other areas with no impact on patient care or ambulance wait times.”

Parker said: “Ten years ago, when you would see a code red happen every few days for a few minutes, it would be a surprise to anybody that was at work going, ‘Wow, we need to clear and get units out somehow because there’s a call waiting, and we don’t have any trucks.’ Today, it’s just a part of the everyday workload these paramedics are facing.”

AHS said having a borderless ambulance service means that if any area needs more support, it can be provided.

“Anyone who needs EMS care will receive it,” AHS said.

AHS said it is seeing an “unprecedented increase” in emergency calls, up by 30 per cent in 2021.

“Several combined factors, including the COVID-19 pandemic, opioid concerns and emergency calls related to people returning to regular levels of activity are contributing to the increase,” the health authority said.

“All call types have increased — all across the province — and high levels of staff illness and fatigue are also contributing to challenges in the EMS system.”

Parker said call volumes have been increasing steadily for the last decade but are “not compensated by additional resources,” adding that dispatchers receive 1,500 calls per day.

“They’re responding [across] hundreds of kilometres now, lights and sirens, to 911 calls in this province because there are just not enough resources to manage the volume,” he said.

‘All day, every day in perpetuity’

“What they are not trained to do is operating a system that operates with zero ambulances all day, every day in perpetuity. There is no end in sight here,” he said.

“They’ve been doing this for coming on years, and there is nobody listening and no leadership happening within the AHS EMS organization,” he added, noting the union talked about the issue with governments and employers, but it’s been repeatedly brushed off.

Parker advised people to write to the health minister and their MLAs to express what they have seen firsthand.

“We need resources added to the street. Our dispatch centres are hanging up on people to answer the next call they are so busy. This needs to be addressed now,” he said.

AHS said it has “brought on additional staff and ambulances and is filling 100 paramedic positions across the province.” The health authority said it is deploying supervisors, delaying some non-urgent transfers and offering overtime to willing staff.

Parker said the problem is not pandemic-specific.

“I wish I could say that once COVID is done, we’ll be back to a situation where we’re OK. That’s something I could stand on and defend,” he said. “It’s not.”