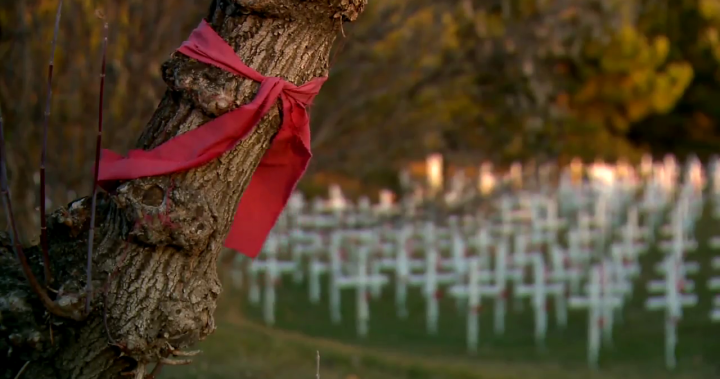 Ribbons honouring missing and murdered Indigenous women and girls were found in a Calgary park’s trash bin on Tuesday.

They were cleared from an area that is now being used as the Field of Crosses, which pays tribute to veterans leading up to Remembrance Day.

Read more:
Outrage after Indigenous art in Calgary covered up with brick wall

Deborah Green said her group tied the ribbons to trees on May 5, on Red Dress Day, and had a gathering at the Field of Crosses location.

“They should have consulted us. Families first. They should not have been touched and especially touched with such ill regard is just unacceptable, inexcusable. We need an apology.”

“With community consultation, the families came forward and they wrote their family members’ names on each one of the ribbons and they wanted to honour their fallen loved ones that were part of the murdered and missing Indigenous people,” she said.

“We were assured by the City of Calgary when we did our event on May 5th that none of the items would be vandalized or touched.”

The ribbons did not impact the veterans’ memorial, Henderson said.

“I was really hurt because for the families — it’s like our people don’t matter.”

Read more:
Would Gabby Petito’s story receive as much coverage if she were an Indigenous woman?

It’s yet another example of devaluing Indigenous lives, Green said.

“We see the veterans’ crosses put up, that they matter more than Indigenous lives and the people that are being murdered and go missing. That’s the message that we get,” she explained.

“It’s really no different than these crosses that are now down here with veterans’ names on them. It would be no different than us going and smashing those crosses and throwing them in the garbage. It’s equivalent to that. Those ribbons are attached to the spirits of our families and our loved ones.”

Kent Griffiths with the Field of Crosses said he did not see any volunteers remove them.

“However, after questioning a few of the staff, it was determined that some tattered red ribbons were seen in the weeks prior to the setup of the crosses and that they may have been removed as part of the area cleanup and site preparation,” he told Global News on Tuesday.

Griffiths said it must have been a mistake.

“I can see no one deliberately wishing to sabotage such a worthy cause. There was also no information provided identifying them as prayer ribbons nor was there any mention by the City of Calgary in the conditions of our Field of Crosses event permit,” he said.

The Field of Crosses organization would “gladly assist in hanging new ribbons if that would help,” Griffiths said.

Global News contacted the City of Calgary, which said it was looking into the matter.