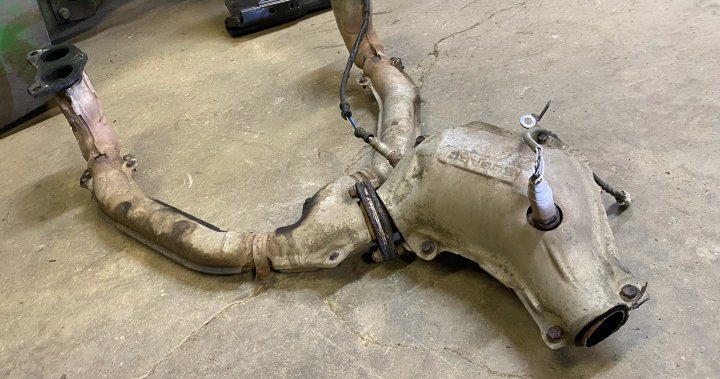 A trip to a popular mall ended up costing a woman from Sylvan Lake much more than she had bargained for: a pricey vehicle repair bill.

While Toni King was shopping at CrossIron Mills Mall in Balzac earlier this month, brazen thieves were helping themselves to her vehicle’s catalytic converter.

“We got there about 1:30 or 2 o’clock,” King told Global News, “went into the mall, did our shopping, come back out and started my car and it was super loud. We both immediately shut off the vehicle and got out and looked.

“I looked underneath the vehicle — and my catalytic converter was cut out!

“They actually did some damage to my transmission and a couple of other pieces.”

King said she was shocked, especially considering the time of day and the fact she had parked in a high-traffic area of the mall.

“My first thought was: ‘What the heck? Why would someone do this in broad daylight?’”

“I’ve heard about it happening in the streets at night or in a dark alley, but why broad daylight and nobody saw anything?”

King reported the damage to mall security and also called the RCMP. She was told any video surveillance would be turned over to police.

CrossIron Mills Mall administration did not respond to our numerous requests for comment.

However, Global News did receive a statement from its property management company, Ivanhoe Cambridge.

“Our security team strictly followed the protocols for this type of regrettable incident.

“We turned the information to the police and they are currently in charge of it. Shall you have any question, please contact the police on the matter.”

Global News asked several times about the security measures the mall has in place to prevent these types of crimes, but did not hear back.

“I wish they would have patrolled more for sure,” King said. “They might have caught them (thieves) in the act.”

Calgary Police (CPS) said catalytic converter thefts are a “quick crime,” taking less than a minute to pull off.

As for why the increase, police said it can generally be attributed to the rising price of the precious metals in catalytic converters, thereby increasing the demand for them.

Police said there are only certain types of vehicles being targeted, usually high enough to crawl under and the catalytic converter is positioned lower down from the engine allowing for easy access. They also pointed out until they can identify where and how they are being sold, they cannot make it more difficult for thieves.

How to protect your vehicle

CPS do have some tips on how vehicle owners can make it more difficult:

Calgary Police also told Global News the Scrap Metal Dealers and Recyclers Identification Act will also help identify where these converters are going and they’re working with other police agencies to share information.

It’s all too late for King, who had to drive home to Sylvan Lake without a catalytic converter. RCMP have also since told her the surveillance images from CrossIron Mills are not identifiable.

King is now out more than $1,000 and had this message for the thieves:

“Stop it! I was fortunate enough to have another vehicle but some people cannot drive their vehicles, they can’t go to work, they can’t afford to pay thousands to replace this.