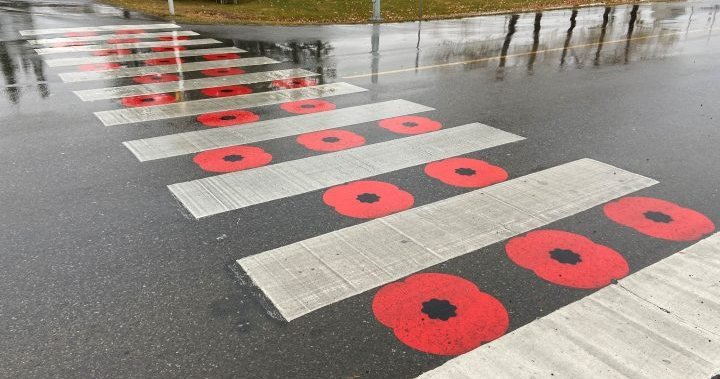 A crosswalk in Chestermere is stirring up some controversy over the use of poppies.

The crosswalk leading to Chestermere’s cenotaph in Anniversary Park got a makeover this week. City of Chestermere crews painted poppies on the road.

Over the past year, the City of Chestermere has been working with a local teen who wanted to bring awareness to veterans by adding a temporary poppy-themed crosswalk.

“For a 14-year-old to be thinking like that, that’s fantastic. It’s a great way to bring attention to remembrance,” said Charles Redeker, operations manager with the Veterans Association Food Bank in Calgary.

“If somebody walking along that crosswalk or driving up to that crosswalk, if it causes them for just a moment to remember a loved one who served, a friend who served or just think about those sacrifices that were made, I think that’s fantastic, and I don’t think there’s any disrespect in it whatsoever.”

The crosswalk was finished this week, and the family has organized an event to officially unveil the crosswalk on Sunday. Redeker said the organizers approached him to say that Sunday’s event would also be a food drive event for the group.

A statement from the City of Chestermere said: “The city is proud to support this local community initiative that was created to offer our community a chance to collectively show their respect and support for our veterans.”

On Friday, a city spokesperson said the city received a concern from the national office of the Royal Canadian Legion about the use of the poppy image.

In a statement to Global News, a spokesperson from the national headquarters of the Royal Canadian Legion said: “The legion deeply appreciates efforts like these, made by community members wanting to help remember our fallen. Unfortunately, this particular display would have unintentionally resulted in individuals walking on the poppy image, which is deemed disrespectful. The poppy of remembrance is a sacred symbol in Canada, representing actual individuals who have paid the ultimate sacrifice.”

According to the communications manager for the national headquarters of the Royal Canadian Legion, the legion was entrusted by Parliament to ensure the poppy image is safeguarded and used respectfully.

Nujma Bond, communications manager for the national headquarters of the Royal Canadian Legion, said the legion often considers special projects that incorporate the poppy image and permission to use it is regularly granted.

“My colleague who oversees the use of the poppy image indicated he has received a number of complaints about this crosswalk, including from veterans who are saying it’s like stomping on the Canadian flag,” Bond said.

“Walking on the poppy image would indeed be considered similar to people walking on a gravestone or on the Canadian flag.”

Bond said the City of Chestermere did not reach out to inquire about using the poppy image as is usually the case when municipalities begin a project.

“We understand many people may not realize there are rules surrounding how the poppy can be used, and we hope they will become more informed as a result of this unfortunate situation. We are currently contemplating what further internal and external education might be helpful going forward,” Bond said.

An event planned by the family behind the crosswalk idea to officially unveil the Memorial Walk is scheduled for Sunday at 1 p.m.

City of Chestermere spokesperson Megan Matthies said that on Friday, the city was in contact with the Alberta/NWT Branch of the Royal Canadian Legion “and they are supporting the event.”

The Legion’s Alberta Command is currently working with Chestermere on alternatives, including providing flags for the weekend event that is planned, according to Bond.

Bond wasn’t able to comment on if there will be a request to remove the painted poppies but said: “The legion’s national headquarters will be working with the City of Chestermere to come up with a longer-term resolution to this situation in the coming days.”