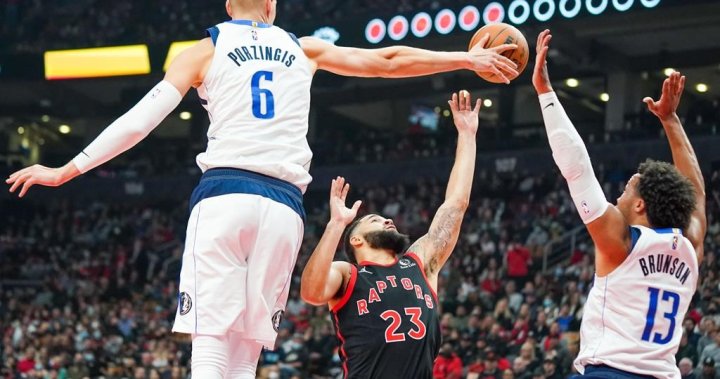 TORONTO – The Raptors knew Dallas Mavericks star Luka Doncic would be a handful. But trying to limit the offensive machine on the second evening of back-to-back nights was one gigantic headache.

After building a six-point lead to end the first half, the Raptors ran into foul trouble and out of gas to allow Doncic and the Mavericks to escape with a 103-95 victory before a sellout gathering of 19,800 at Scotiabank Arena on Saturday.

Doncic scored 16 of his 27 points in the second half to wipe out the good vibrations from the Raptors’ start, and those carried over from the win in Boston against the Celtics on Friday.

“He can do so many things with the ball, with the ball in his hands, and he just makes things happen,” Barnes added. “He torches people coming off the ball screen, hitting the weak-side guy, scoring, getting to the basket, being able just to get a lot of attention being able to do so many different things.”

The talented 22-year-old Slovenian was the 2018-19 NBA rookie of the year and a league all-star the past two seasons.

Doncic played on the Slovenian national team with Raptors guard Goran Dragic. The two have been roommates at past international events, and Dragic has served as a mentor for Doncic.

Doncic not only led all scorers, but his play also forced Anunoby and Barnes into foul trouble and limited playing time in the second half when they each reached five personal fouls.

Doncic’s threat also opened up some floor space for backcourt mate Tim Hardaway Jr., who drained 7-of-11 three-point attempts in his 25-point outing.

“It disrupted our team play,” said Barnes, who followed up his 25-point game in Boston with 17 points against Dallas. “Them calling a bunch of fouls throughout the game, so switching up the game plan, things that you want to do, you can’t do. I would say it kind of disrupted my game defensively because I couldn’t be as aggressive as I would’ve because I had to watch out for fouls.”

Anunoby led the Raptors offensively with 23 points. He had 20 points by half-time, but picking up his fifth foul in the third quarter altered his game, too.

“It definitely messed it up,” said Anunoby, who took only three shots in the second half.

“I’ve definitely got to be more aggressive with my shot more, be more involved.”

The Raptors (1-2) jumped out to a 16-2 lead and enjoyed a 51-45 advantage at the half. But the Mavericks (1-1) kept chipping away. Finally, in the third quarter, they tied the game at 62-62 and took the lead for good on a Doncic pass to Toronto native Dwight Powell for a dunk and a three-pointer from Doncic.

A brilliant alley-oop play from VanVleet, who finished with 20 points, to Precious Achiuwa pulled the Raptors to within 74-72. But the Raptors needed more support from the bench, especially in a back-to-back situation and the foul trouble with two of their starters.

“We probably ran out of gas a little bit,” said coach Nick Nurse, whose bench supplied only five points. “Those are the nights we really need our bench to provide some energy at home, back-to-back, we really needed them to give us something, and they got outplayed pretty badly, I thought.”

This report by The Canadian Press was first published Oct. 23, 2021.

Ontario reports over 1,000 new COVID-19 cases for the second day in a row