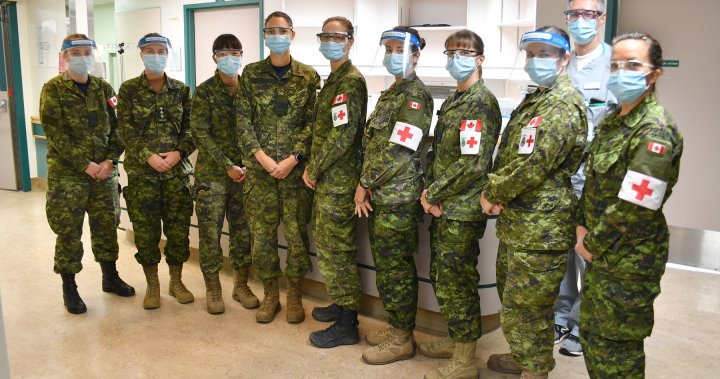 Front-line workers battling the fourth wave of COVID-19 in Saskatchewan are about to get some much-needed help from the Canadian military.

In a tweet Friday night, Minister of Public Safety and Emergency Preparedness Bill Blair stated the armed forces are on their way to the province to provide the necessary support to fight the pandemic.

Blair added discussions are also underway for additional Canadian Red Cross personnel to deploy to the province, which is suffering the worst weekly death rate in the country.

He said the federal government would have “more to say on the situation in (Saskatchewan) shortly.”

As Saskatchewan faces a surge of COVID-19 cases, we have approved a request for federal assistance to support the people of SK. The @CanadianForces will provide communities the support they need to fight the pandemic.

Leadership from Saskatchewan’s Provincial Emergency Operations Centre (PEOC) announced on Friday that “roughly” two to four COVID-19 patients are expected to be transferred to Ontario daily, starting next week.

So far, six intensive care unit patients have been transferred to Ontario hospitals and three more are scheduled to transfer between Friday and Sunday.

Saskatchewan Public Safety Agency president Marlo Pritchard said in a Friday briefing added these transfers are being made to reduce strain on the province’s health-care system.

As of Friday, there are 80 COVID-19 ICU patients in Saskatchewan hospitals.

Pritchard said the provincial emergency operations centre continues to hold meetings with the federal government, including Public Safety Canada. He said good progress has been made so far.

“I expect to have more information soon about having boots on the ground at some point next week,” Pritchard told reporters.

The Saskatchewan Health Authority said Friday it may soon activate the next stage of its triage plan due to the stress on the health-care system.

Derek Miller, the authority’s chief of emergency operations, said a committee made up of doctors and ethicists is set to prepare a formal recommendation to move to the second stage of triage.

The province has been operating under the first stage for several months, which has involved cancelling surgeries to free up bed space and health-care workers to focus on COVID cases.

The second stage involves doctors consulting with ethicists about who and who does not get life-saving care.

Data from the health authority for this month shows Saskatchewan had the most residents in intensive care units per capita than any other province at any point in the pandemic.

Earlier this week, the province released modelling that shows hospitalizations are likely to increase until December, unless restrictions are reintroduced, and health care might not return to sustainable levels until March.

–With files from the Canadian Press