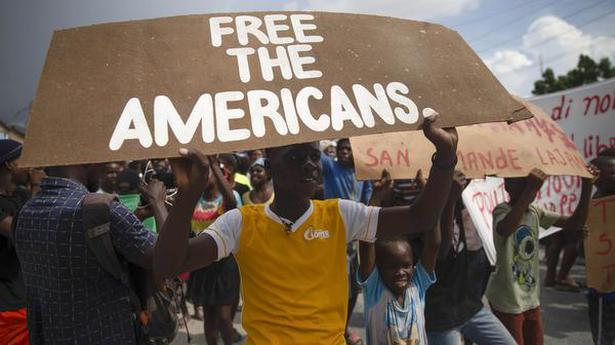 The official, who wasn’t authorised to speak to the press, said someone from the 400 Mawozo gang called a Ministry leader shortly after kidnapping the missionaries on Saturday and demanded the ransom

A gang that kidnapped 17 members of a U.S.-based missionary group is demanding $1 million ransom per person, although authorities are not clear whether that includes the five children being held, a top Haitian official told The Associated Press on October 19.

The official, who wasn’t authorised to speak to the press, said someone from the 400 Mawozo gang called a Ministry leader shortly after kidnapping the missionaries on Saturday and demanded the ransom. A person in contact with the organisation, Christian Aid Ministries, also confirmed the $1 million per person demand, which was first reported by The Wall Street Journal. That source spoke on condition of anonymity due to the sensitivity of the situation.

The ages of the adults being held captive range from 18 to 48, while the children are 8 months, 3 years, 6 years, 13 years and 15 years, according to a statement from the organisation on Tuesday. Sixteen of the abductees are Americans and one Canadian.

“This group of workers has been committed to Minister throughout poverty-stricken Haiti,” the Ohio-based Ministry said, adding that the missionaries were most recently working on a rebuilding project to help those who lost their homes in the magnitude 7.2 earthquake that struck on Aug. 14.

The group was returning from visiting an orphanage when they were abducted, the organisation said.

A recent wave of kidnappings prompted a protest strike that shuttered businesses, schools and public transportation starting Monday in a new blow to Haiti’s anemic economy. Unions and other groups vowed to continue the shutdown indefinitely.

In Washington, White House press secretary Jen Psaki said on Tuesday that “the FBI is a part of a coordinated U.S. government effort to get the U.S. citizens involved to safety”, with the American Embassy in Port au Prince coordinating with local officials and families of those seized.

“Kidnapping is widespread and victims regularly include U.S. citizens. We know these groups target U.S. citizens who they assume have the resources and finances to pay ransoms, even if that is not the case,” she added, noting that the government has urged citizens not to visit Haiti.

She confirmed it is U.S. policy not to negotiate with those holding hostages, but declined to describe details of the operation.

The kidnapping was the largest reported kidnapping of its kind in recent years, with Haitian gangs growing more brazen and abductions spiking as the country tries to recover from the July 7 assassination of President Jovenel Moïse and the earthquake that hit southern Haiti and killed more than 2,200 people.

“We are calling on authorities to take action,” said Jean-Louis Abaki, a moto taxi driver who joined the strike Monday to decry killings and kidnappings in the hemisphere’s poorest nation.

With the usually chaotic streets of Haiti’s capital quiet and largely empty, Mr. Abaki said that if Prime Minister Ariel Henry and National Police Chief Léon Charles want to stay in power, “they have to give the population a chance at security”. Haitian police told The Associated Press that the abduction was carried out by the 400 Mawozo gang, which has a long record of killings, kidnappings and extortion. In April, a man who claimed to be the gang’s leader told a radio station that it was responsible for abducting five priests, two nuns and three relatives of one of the priests that month. They were later released.

At least 328 kidnappings were reported to Haiti’s National Police in the first eight months of 2021, compared with a total of 234 for all of 2020, said a report last month by the United Nations Integrated Office in Haiti.

Gangs have been accused of kidnapping schoolchildren, doctors, police officers, bus passengers and others as they grow more powerful and demand ransoms ranging from a couple hundred dollars to millions of dollars.

Ned Price, the U.S. State Department’s spokesman, said U.S. officials have been in constant contact with Haiti’s National Police, the missionary group and the victims’ relatives.

“This is something that we have treated with the utmost priority since Saturday,” he said, adding that officials are doing “all we can to seek a quick resolution to this.” U.N. spokesman Stephane Dujarric said the rise in gang violence has affected relief efforts in Haiti. He said the U.N. resident and humanitarian coordinator reported that “violence, looting, road blockades and the persistent presence of armed gangs all pose obstacles to humanitarian access. The situation is further complicated by very serious fuel shortages and the reduced supply of goods.” Mr. Dujarric said that Haiti’s government should redouble efforts to reform and strengthen the police department to address public safety and that all crimes must be investigated.

Christian Aid Ministries said the kidnapped group included six women, six men and five children. A sign on the door at the organisation’s headquarters in Berlin, Ohio, said it was closed due to the kidnapping situation.

Among those kidnapped were four children and one of their parents from a Michigan family, their pastor told The Detroit News. The youngest from the family is under 10, said Minister Ron Marks, who declined to identify them. They arrived in Haiti earlier this month, he said.

A pair of travelling Christians stopped by the organisation’s headquarters on Monday with two young children to drop off packages for impoverished nations. Tirtzah Rarick, originally of California, said she and a friend prayed on Sunday with those who had relatives among the abductees.

“Even though it’s painful and it provokes us to tears that our friends and relatives, our dear brothers and sisters, are suffering right now in a very real physical, mental and emotional way, it is comforting to us that we can bring these heavy burdens to the God that we worship,” she said.

News of the kidnappings spread swiftly in and around Holmes County, Ohio, hub of one of the nation’s largest populations of Amish and conservative Mennonites, said Marcus Yoder, executive director of the Amish & Mennonite Heritage Centre in nearby Millersburg, Ohio.

Christian Aid Ministries is supported by conservative Mennonite, Amish and related groups in the Anabaptist tradition.

The organisation was founded in the early 1980s and began working in Haiti later that decade, said Steven Nolt, professor of history and Anabaptist studies at Elizabethtown College in Pennsylvania. The group has year-round mission staff in Haiti and several countries, he said, and it ships religious, school and medical supplies throughout the world.

Conservative Anabaptists, while disagreeing over technology and other issues, share traditions such as modest, plain clothing, separation from mainstream society, closely disciplined congregations and a belief in nonresistance to violence.

The Amish and Mennonite communities in Holmes County have a close connection with missionary organisations serving Haiti.

Every September at the Ohio Haiti Benefit Auction, handmade furniture, quilts, firewood and tools are sold, and barbecue chicken and Haitian beans and rice are dished up. The event typically brings in about $6,00,000 that is split between 18 missionary groups, said Aaron Miller, one of the organisers.