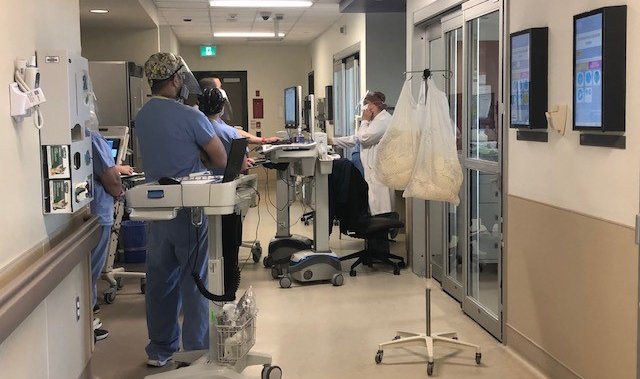 An infectious disease physician and the official opposition both believe politics guide the Saskatchewan government’s response to COVID-19.

Both spoke a day after Premier Scott Moe announced the province is transferring six COVID patients to Ontario to help ease the burden on the overcrowded ICUs.

Both said the province must to do more to protect residents from the disease.

Read more:
Saskatchewan premier apologizes to those left without health care due to COVID-19

Dr. Alex Wong, in Regina, stated he believes the government uses “some reasoning, that is political in nature, that keeps our elected officials, specifically our minister of health and our premier, from implementing clear public health… interventions.”

“We’re asking that, moving forward, all of Dr. Shahab’s recommendations be made publicly available,” she told reporters.

“Enough of the behind-the-scene politics,” Mowat said, saying health minister Paul Merriman should be as forthright as possible.

During a press conference with the Provincial Emergency Operations Centre (PEOC) leadership team on Monday, Dr. Shahab said he recommended strongly that people limit themselves to two or three households for private gatherings.

Shahab’s advice remains just that — a recommendation. Saskatchewan is the sole province or territory without any form of government restrictions or guidance on gathering size restrictions.

The province also had the highest death rate per capita in the past two weeks, with 5.7 deaths per 100,000 people, according to the federal government.

“There’s a reason why (gathering size restrictions have) literally been implemented every single place in the country, except us,” Wong said from his office in Regina, stating that even vaccinated people can transmit the virus.

The situation in the province’s ICUs, he said, was dire.

“We know informal triage is happening at the bedside, (doctors are) having to make hard decisions again about who gets access to resources and who does not.”

And things could still get worse.

The University of Saskatchewan’s Global Institute for Water Safety, which tracks COVID-19 virus load in the water for several cities, recorded a 109-per cent increase in Saskatoon from Oct. 7-13 over the prior week.

Giesy said the fact the virus load doubled doesn’t mean new cases will double, but told Global News the figure can offer a hint about what the city will soon experience.

“Hospitalizations lag a week to two weeks behind our numbers,” he said.

“So by the time people get sick, end up sick enough to be in the hospital and get diagnosed, (it) takes some time.”

“What we don’t know now,” he went on to say, “is what’s going to happen when the weather turns cold. That’s the next big unknown.”

Global News reached out to Moe’s and Merriman’s offices to ask what health measures Shahab had recommended since July 11 and which of them the government had enacted.

Global News also asked the premier and health minister if they would implement gathering size restrictions in light of the post-Thanksgiving doubling of the virus load.

The Saskatoon Public Safety Agency, which coordinates the PEOC, responded.

A statement said the PEOC, “is taking a strategic approach when it comes to resource requests, to ensure that requests meet the needs of the province at any given time.”

“There doesn’t appear to be any clear end in sight at this point,” Wong said, referring to the pandemic, saying he and other front-line workers will struggle in the next few weeks.

“If there’s no further action, then we’re just kind of going to see how it goes. We’re going to be on our own.”