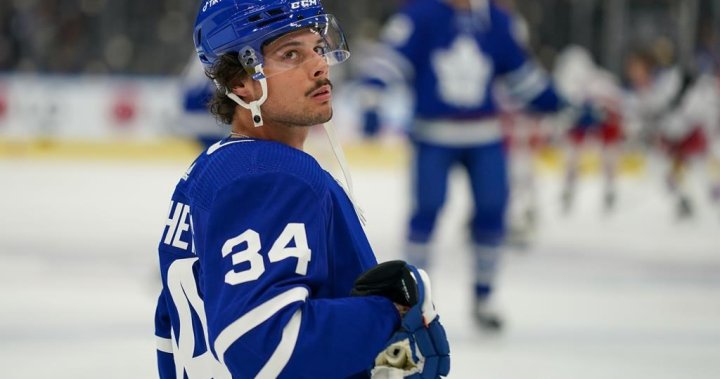 TORONTO – Auston Matthews did just about everything in his return Monday.

Everything, that is, except find the back of the net.

Igor Shesterkin was outstanding in making 40 saves before Artemi Panarin scored in overtime as the New York Rangers defeated the Toronto Maple Leafs 2-1.

Matthews saw his first game action in 4 1/2 months after undergoing surgery on a nagging wrist injury that bothered him most of last season when he scored 41 times during the NHL’s pandemic-shortened campaign to capture his first Maurice (Rocket) Richard Trophy as the league’s goal leader.

The 24-year-old sniper had a game-high 16 shot attempts — including eight on target — against the Rangers and played 22 minutes 53 seconds in his first live action since May 31.

“The adrenalin the first 10 minutes kept me in it,” Matthews said. “Just hopping right out there, I could sense a little bit of fatigue setting in, but I tried to push through it.”

Toronto’s star centre had a couple of terrific chances to send his team home with the extra point in a frantic 3-on-3 OT that saw both goalies make incredible stops. He intercepted a Shesterkin clearing attempt and forced a save out of the retreating netminder before William Nylander scooped up the rebound and fed Matthews against the grain for a one-timer that was also saved.

The loose puck appeared there for the taking in the New York crease, but Matthews was thwarted by defenceman Jacob Trouba, who was stopped by Jack Campbell at the other end moments earlier inside a raucous Scotiabank Arena.

“My eyes definitely lit up there on the shot and the rebound,” Matthews said. “I definitely wanted that one back.”

Panarin then won it at 3:48 off a faceoff in the Leafs’ end when he played a quick give-and-go with Mika Zibanejad before firing past a surprised Campbell.

“We stole one,” said Zibanejad, who had the other goal for New York (2-1-1) to register the 100th two-point game of his career. “I don’t think we played good enough for long enough.

“Igor, if it’s not for him, then I don’t want to imagine what would happen.”

Michael Bunting replied for Toronto (2-1-1), which has five of a possible eight points on the young season despite not getting any goals from Matthews, Mitch Marner or John Tavares.

“Shesterkin played really well,” said Campbell, who made 21 saves, including a couple of big ones in OT. “It was a good challenge.”

Monday’s game was the first for Toronto against an U.S.-based opponent since the Columbus Blue Jackets downed the Leafs on Aug. 9, 2020, to win their qualifying round series inside the NHL’s post-season bubble.

The league’s seven Canadian franchises played in the one-time-only North Division in 2020-21 because of pandemic border restrictions related to non-essential international travel.

Monday’s attendance was announced at 18,098 spectators, marking the third consecutive game at Scotiabank Arena that fell short of a sellout.

While the building wasn’t quite full, it was certainly loud — especially in the edge-of-your-seat overtime.

“It felt awesome, honestly,” said Matthews, who despite the loss was still smiling following his first game at home with paying fans since March 2020. “Just the energy … you can feel it throughout the rink.

Leafs head coach Sheldon Keefe told Matthews before the game he would play as he normally would, and the team’s best player was more than happy to oblige.

“Loved being out there every second,” he said. “Definitely gonna sleep pretty good tonight.”

“He was all over it,” Keefe added. “That keeps happening, they’re gonna go in in bunches.”

And with the Leafs off until Friday when they host the San Jose Sharks, the coach felt it was a good opportunity to get Matthews as many minutes as possible.

“He probably could have done without overtime, but I think it’s good for him to go through that,” Keefe said. “Just keep putting him out there and get him to push through.

“He was very effective throughout the game despite the fact that naturally that would be a challenging night for him from a conditioning perspective.”

The Leafs’ new-look power play finally had Matthews in the mix, and while it failed to generate any offence on three opportunities, the unit created plenty of good looks.

“It could have made a huge difference, not just one more goal (and) we win the game, but just as a chance to really build positive momentum,” Keefe said. “It did that in terms of spending the time in the zone, but a power play needs to produce.

Matthews didn’t have to wait long to test out his wrist in live game action, but Shesterkin turned away his first two efforts on a Toronto power play early in the first period.

Zibanejad opened the scoring off a turnover when he ripped a shot that struck iron and pinballed off the television camera inside Toronto’s net at 13:49. Toronto pulled even 1:36 into the second when Morgan Rielly’s shot on Shesterkin caromed in off a hard-charging Bunting for his second goal in as many games.

The Rangers, who were minus winger Kaapo Kakko (upper-body injury) and centre Ryan Strome (COVID-19 protocol), were on their heels most of the rest of the night as the home side came in waves.

But Shesterkin stood tall time and again before New York finally sealed in the back-and-forth OT.

“It’s pretty amazing,” Matthews said of the emotion throughout a building that sat dormant all last season. “We’d like to get that second point.

“But just to be playing in front of fans again, it’s quite a feeling.”

Notes: Michael Hutchinson dressed as Campbell’s backup after the Leafs were forced to sign University of Toronto goalie Alex Bishop to a one-day amateur tryout contract ahead of Saturday’s 3-1 win over the Ottawa Senators with Petr Mrazek (groin) unavailable and the team tight against the salary cap. … The No. 2 pick at the 2019 NHL draft, Kaapo was injured in the first period of Saturday’s 3-1 victory in Montreal against the Canadiens.

This report by The Canadian Press was first published Oct. 18, 2021.