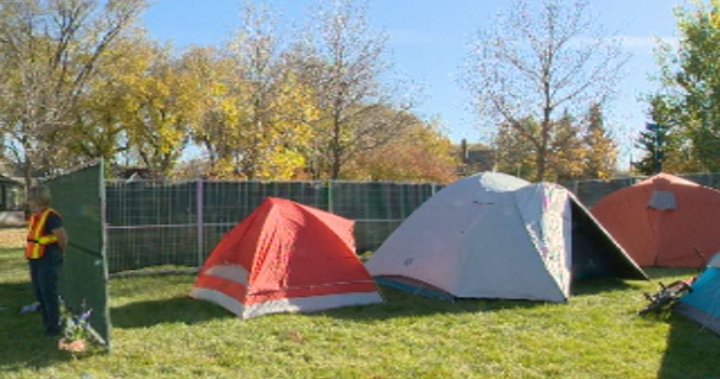 The encampment is named after a Regina woman who died earlier this month due to her struggles with homelessness and addiction.

Individuals who are helping with the tent city are hoping their efforts can prevent another tragic death from occurring.

After the province replaced the Saskatchewan Assistance Program (SAP) and the Transitional Employment Allowance (TEA) with the new Saskatchewan Income Support (SIS) program, advocates say it has resulted in worsened, precarious situations in which people are unable to pay their rent and are looking for shelter and food elsewhere.

As Sunday afternoon went on, numerous people could be seen bringing various kinds of meals, snacks, water, beverages, and other supplies to the site.

“First day, we had one tent, we are now up to 27 tents right now,” said Shylo Stevenson, communications officer for Regina Needle Recovery and Community Support (RFPS), one of the organizers of the camp.

“Approximately 20 to 40 people coming and going, social services do come in and take a lot of the residents from here and are lodging them in hotels around Regina right now,” he added.

Stevenson said a sit-down meeting was held between them and Chad Ryan, the executive director from the Saskatchewan Social Services Ministry, on Sunday.

Stevenson said they are trying to work out how to move forward. A follow-up meeting to discuss the next steps is planned.

Stevenson said he cannot discuss details of their discussion at this time, however, he says Ryan appeared to show “real interest in making sure people were okay and fed and where the lack of services was.”

Now, organizers are calling on officials from the Ministry of Mental Health and Addictions to join the discussion on a daily basis, rather than just during “office hours, Monday to Friday.”

“These issues are 24 hours a day and we’re putting the pressure on to get all of these key stakeholders at the table to say, ‘in order for this person to get into a house, they need some mental health assessment, some addictions services as well as financial supports,’” Stevenson said.

When it comes to residents from the camp being temporarily lodged in hotels by the Social Services Ministry, Stevenson wants the ministry to take more accountability to ensure those facing homelessness do not remain trapped in a “revolving door” of homelessness.

“I just asked the Ministry of Social Services that you cannot put these people back into camp, because you assumed a responsibility for these people,” he explained.

“For you to send them back to us, you are making them homeless, because they stepped in to intervene to look like the heroes, which is great, but now they need to carry on with that support,” Stevenson said.

He continues to say that workers from The Saskatchewan Assured Income for Disability (SAID) and SIS programs have been attending the location to speak with individuals about their situation and how it can be bettered.

As they wait to see what happens next, a fence can now be seen erected around the perimeters of the tents. Stevenson said there are several reasons that lead to the fencing being put up by the city.

“The main one was to protect people from the elements. Last week when we were in the middle of the cold and everything, we needed something like this to prevent the wind — a lot of tents went down,” he said.

With the harsh conditions of a prairie winter being just around the corner, Stevenson said he and others are genuinely worried about where dozens of people will go, especially with shelters in the city being overwhelmed and having to turn people away on a regular basis.

He said for now the warm blankets and tents being supplied are providing shelter at night, but come winter with -40 and -50 temperatures , it’ll be a whole different story.

“Secondly, [the fence] prevents a lot of concerned citizens and irate citizens from coming and being confrontational with the volunteers and residents,” he added.

“We just ask that they take [their concerns] to the levels of government, it’s not our fault that we’re in this situation, [the fence] provides protection where there’s only one way out and way in, a sense of security,” Stevenson said.

He also said the fence helps maintain the privacy of the residents utilizing the camp, it helps protect their dignity as the site is not “a zoo” that people can come and gawk at as they desire.

Additionally, he said some have complained about the site being an “eyesore,” but others, like volunteer Ian Betz-Wood, see something entirely different.

“We have so many other, bigger problems, that helping someone get housing so that they can get help and transition into something that’s better or more suitable is far more important than maybe something not looking the best … that trumps everything else,” Betz-Wood stated.

He said with the Regina Fire and Protective Services (RFPS) giving the camp the green light a few days ago to use charcoal briquettes in two fire pits to generate heat, the team was cleaning out the areas on Saturday.

He adds that the heat will help make evenings and nights outside more bearable for those sleeping and living in the tents.

Betz-Wood goes on to say he has volunteered multiple times, but after a long day of cleaning out fire pits at the site, it hit him just how simple, everyday things like taking a shower can so easily be taken for granted by many.

“I went home, covered in soot, and I never realized until yesterday how important [showering] is and how much that can change a day for someone,” he said.

The government has formed a 3-member committee to identify, demarcate and assess the extent of areas infested with invasive alien species in forest...
Read more
Calgary

A new national survey indicates many Canadians don’t want the NFL here at the CFL‘s expense but may also reinforce the biggest challenge...
Read more

The government has formed a 3-member committee to identify, demarcate and assess the extent of areas infested with invasive alien species in forest...
Read more
Calgary

A new national survey indicates many Canadians don’t want the NFL here at the CFL‘s expense but may also reinforce the biggest challenge...
Read more