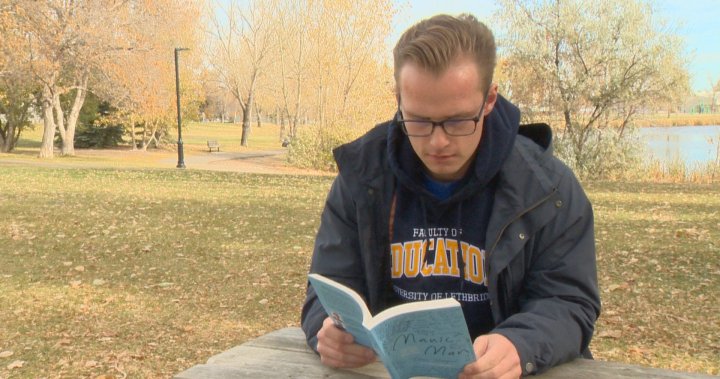 Twenty-four-year-old Jason Wegner is a newly published author. His book, Manic Man: How to Live Successfully with a Severe Mental Illness, is an honest look at a severe manic episode he experienced in 2017.

Later, he would be diagnosed with bipolar 1 disorder.

These ideas led Wegner to act recklessly and putting himself in danger.

Read more:
Renee was diagnosed with bipolar disorder, depression and agoraphobia. Here’s how she got help

His parents, worried for their son, took him to see Dr. Kerry Bernes, a psychologist who specializes in mood disorders. He remembers the first time meeting Wegner.

“His parents dragged him in to see me when he didn’t think there was anything wrong with him and no need to see a psychologist,” said Dr. Bernes. “He talked non-stop for 55 minutes straight. No one, me or his mom or dad, could get a single word in because he was in a massive manic state.”

After that first meeting, Dr. Bernes called Wegner’s parents and advised them to admit him to hospital.

It was around this time that Wegner decided to take a vow of silence.

“I thought, nobody was listening to me with my hundreds of social media posts a day and rants on Snapchat,” he said. “The man who couldn’t shut up took a vow of silence was kind of my catchphrase.”

Wegner began documenting every conversation and thought he had on his legs and clothes.

He was wearing a pair of white shorts with his writing all over when paramedics arrived at his house on August 31, 2017. They asked how he was doing.

“I said, ‘I’ve never felt better in my life. I’m on superhuman levels of intelligence and performance,’” Wegner said. “They replied, ‘Well, we were called to check up on you because some people are concerned that you may be a harm to yourself.’

“I would be in the hospital for 57 days in the acute psychiatry ward before they released me because it took that long for me to get down from the mania.”

Getting out of the hospital meant learning how to learn with his new diagnosis of bipolar 1 disorder. So, Wegner went back to Dr. Bernes.

“It’s just been unbelievable because he went from pretty out there to unbelievably switched on,” said Bernes.

Writing a book was suggested to Wegner after speaking to a class about his journey.

“Someone in the audience came up to me and said, ‘Your story was really inspiring. I think it could give a lot of people hope with this condition. Would you consider writing a book about this?’”

Wegner approached Bernes with the idea.

“This is a story of how hard he worked, how well he did to overcome this, that him and I thought needed to be told,” said Bernes, who is listed as the book’s co-author.

“Clinically, it’s a story that frequently ends in homelessness and people giving up on people,” he added. “So I wanted the population to see that this is something that’s very treatable.”

Read more:
Canada is seeing a mental health ‘crisis’ but more are willing to discuss it: poll

Manic Man was picked up by U.K. publisher, Cherish Editions. It hit bookstore shelves on Oct. 14.

“I hope by me sharing my book, Manic Man, that people can see that we can talk about this and you can still live a successful life with any type of illness,” said Wegner.

Today, Wegner is proud to say that he’s doing better than he was before his episode, something he calls “exciting.” He’s working, coaching football and will be graduating from college in December. He hopes to become a teacher.

“I think it’s critical, in this case, that people understand that this is a disorder that looks pretty scary and if not treated appropriately and quickly can be pretty scary,” said Bernes. “But at the same time, if people reach out by reading a book, hearing a story of success that this is something that can be dealt with quite effectively and have their life back.”

Manic Man: How to Live Successfully with a Severe Mental Illness is available at Chapters, Analog Books Inc. and Amazon.